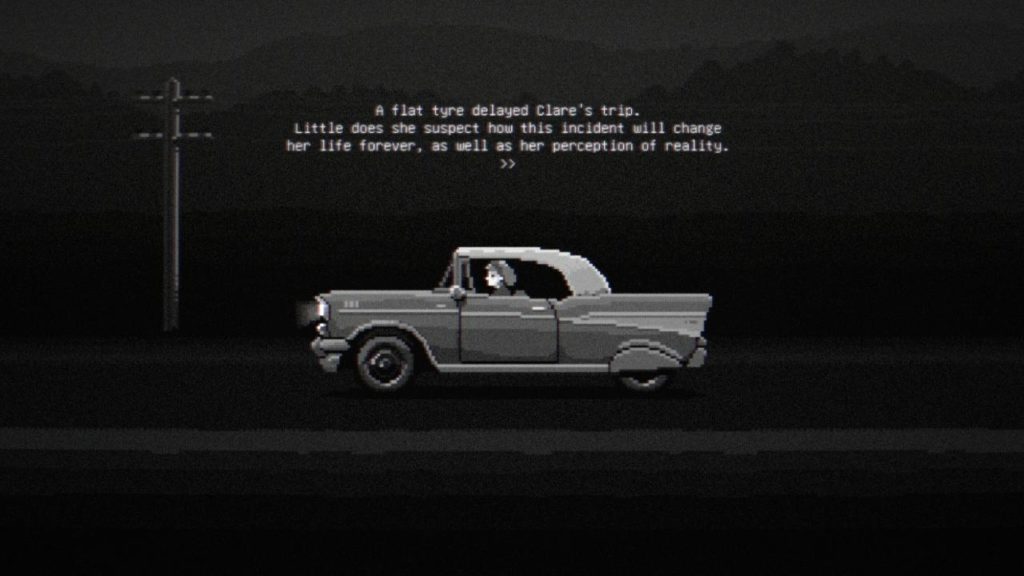 Octavi Navarro, renowned for his fantastic short adventure games, has created a special edition of 2017’s first entry into his Midnight Scenes series. A sort of Twilight Zone tribute, Midnight Scenes plays off on those 1960s black-and-white episodes, with their melodramatic opening monologues, then somewhat ambiguous spooky tale that follows. The Highway is a fifteen minute monochrome point-and-click adventure, showing off Navarro’s exquisite pixel art.

You play as Claire Barnes, 29, driving home in the dark, when a fallen telegraph pole lies across the bleak road, blocking her way. Tasked with trying to reach a telephone on the other side of the pole, you end up exploring a nearby house as you solve a few fairly typical PnC puzzles. All while spooky music and sound effects give everything a chilly air.

This Special Edition comes with a lovely pdf art book, that talks about the art style, and shows lovely frame-by-frame illustrations of some of the animations, and comparisons between sketches and the final art. It also includes mp3s of the splendid spooky soundtrack. And rather importantly, the game is now localised into French, Italian, German, Spanish, Russian, Japanese, and Simplified Chinese.

I’m a huge fan of Navarro’s work, and we’ve previously celebrated the brilliant The Supper. Honestly, I don’t find The Highway to be quite as compelling as his other games. Certainly not for its art and design, which is pixel-perfect, with brilliant lighting, surprises and incredible timing. I just find the loosey-goosey super-ambiguous Twilight Zone thing a bit too distancing, and I think the final moment in this is a bit flat. However, it seems everyone else who’s ever written about it strongly disagrees with me, so you may well too.

I far prefer the 2018 follow-up, The Goodbye Note, and I hope Navarro plans to give this a similar polish and update for a Steam release. It’s a more involved little tale, and has a much more satisfactory conclusion. For me, at least. Which is perfect for a Twilight Zone-a-like, because who doesn’t feel similarly about individual episodes, whether the originals or the often brilliant Jordan Peele reboot.

Everyone should support Navarro because his games are great and his art impeccable. As well as by buying his games, you can also support his Patreon. And hopefully we may yet see a third episode in the Midnight Scenes series?