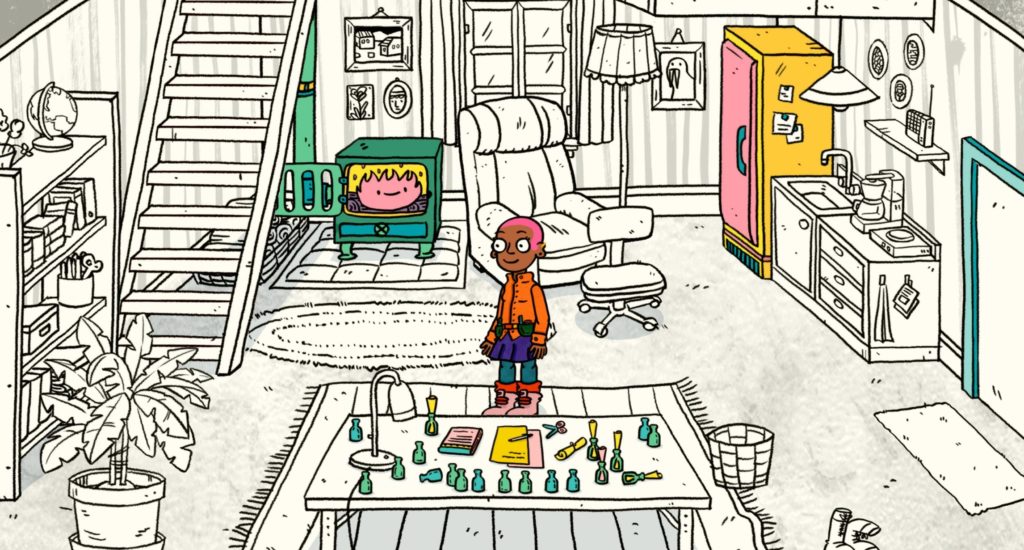 What a run of great free things we’re featuring of late. The latest is Welcome To Elk’s prologue, which I admit is not as buried as many indie games, but good grief, there’s not a lot to choose from this week. And who cares, because the more eyes on this peculiarity, the better.

Welcome To Elk purports to be based on true stories. So it’s a bold opening to begin on a boat with a faceless man and talking llama. Admittedly this is a dream, but Anders maintains that he’s still dead when you chat to him the next morning. And, well, there’s a fish head floating in a jar in a bar with whom you can chat, soooooo I’m going to hold some reservations when it comes to wholly believing the validity of these tales.

Set on a small island, and going by the names, attitudes and warm clothes, I’m guessing a Scandinavian island, you play as the unfortunately named Frigg (maybe they don’t know?), who chats to the various foul-mouthed locals to hear their stories. Stories you then play through controlling those people, invariably ending in a sort of reversal of the traditional Guitar Hero-style music games. Games in which you pick the correct tune, and the game then agrees with you.

This is where it absolutely explodes off the screen. An already compelling game, with its striking cartoon style and brilliant sweary dialogue, becomes something on a whole new level as it allows you to feel brilliantly musical. Tunes play, and you’re able to pick between four note options, and then somehow makes whichever you choose sound absolutely fantastic. In the first instance, in the dream sequence, the llama (alpaca?) echoes your tune back after you’ve sung it, and it sounds so glorious. And I just adore this mirroring of the form, where you’re usually supposed to copy a game’s tune accurately to proceed. I’m rubbish at that, and to get to feel so successfully musical here is such a pleasure.

This is essentially a demo for the full game to come. It contains three stories, including one that’s simply a video of a man telling his tale. There’s also a beer-pouring mini-game, making faces on balloons, and a nice bit of wandering around. The tone is ambiguous, and the full game will apparently offer a variety of moods and degrees of severity. But goodness me, if it can keep providing those glorious singing moments, it’ll be a wondrous thing.

This free version is wondrous already. I really strongly suggest getting this and experiencing what it’s like to feel so melodic. Of course it’s not the first game to allow you to hit notes to make pretty tunes – heck, 2007’s indie pioneer Aquaria did it splendidly. But there’s something about the way the game agrees with your musical choices that is wonderfully validating and rewarding.

I love the whole vibe of this. Art, music, writing, the works.