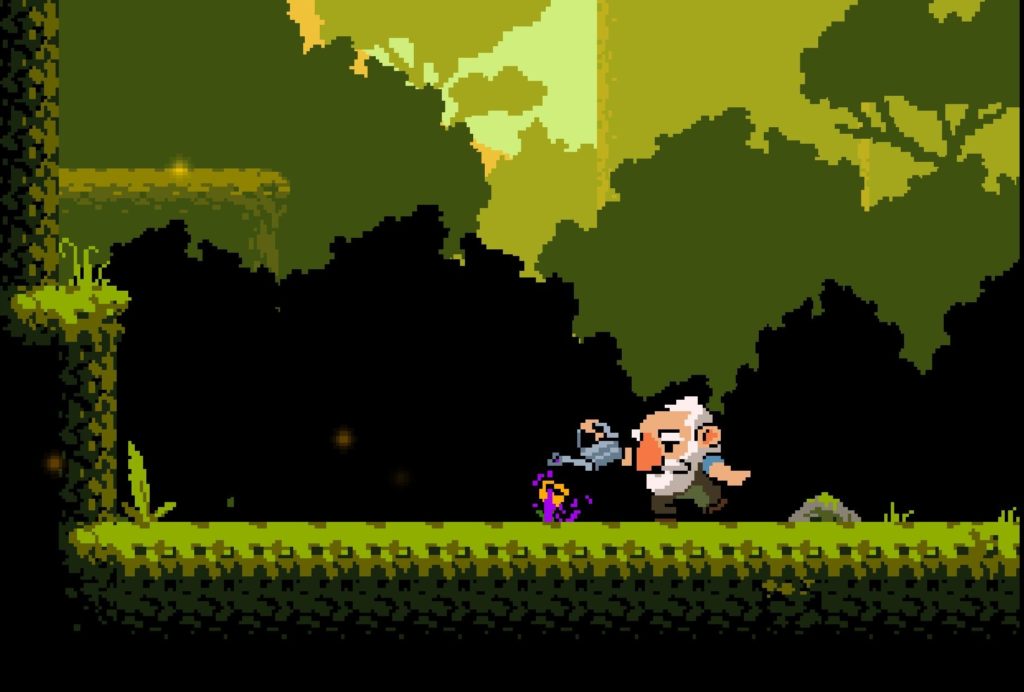 Wow, this is a proper special little game, that has somehow swooped right under everyone’s radar. Perhaps it’s the slightly undercooked pixel graphics? Maybe it’s that you play as a pretty flower-girl-thing? It could be that its Steam description reads like a text book on dust analysis. But this is very lovely, and boasts some splendid platforming mechanics.

Things begin when a kindly old gentleman accidentally waters a seed with magic potion, and thus born is a sentient flower child. As you explore you quickly gain a few basic abilities, including most importantly, being able to fire out a green shoot that acts like a grappling hook. Yay grappling hooks!

As you explore this sort of horticultural mini-Metroid, you gather new skills that make further areas accessible – and most importantly, previous areas pleasingly trivial. You’re looking for four patterns to open a portal, where the old fella tells you his wife disappeared some 37 years ago.

Things begin extremely gently, and while you have to get used to the mouse/keyboard approach to the platforming (and it’s for the best, because pointer precision plays a big part in later stages), it seems like a pretty simplistic thing. And then it very gradually, very carefully gets harder. Until by the end, goodness me, it’s a tricky affair.

Well, I say the “end”, but of course it also has to finish with an extremely tiresome and woefully over-difficult boss fight, so I’ll likely never see the actual end of the game unless someone else ever notices this and streams it. Bah. STOP THIS, GAMES.

There are certainly some issues. The most significant is when you get your retracting grapple (which you will have been longing for by that point), it’s used by double-clicking the left mouse. And WOW, it’s after a fast double-click. Now, I reckon I could comfortably compete in the International Super-Fast Double-Clicking Championships, but of course when things are in that zone, there’s far too much ambiguity between a double-click and just the one, and I far too often fell onto spikes because it didn’t recognise the input.

It’s also not exactly generous when it comes to rapid-aiming at the tops of grabable surfaces, and too often fires off just above it. A little bit more sense about what the player is attempting would make things much more amenable. However, death is expected, and results in instantaneous restarts at the nearest very frequent checkpoints. You will die a squillion times here, and it doesn’t keep count, nor tut at you for it.

By the end I was so damned skilled with my tools, and zipping around where once I’d crawled. Which only makes the final boss such an incongruous disappointment, where an elaborate obstacle course that employs all the skills you’d learned would be far more suitable a finale.

This is a short game in the Metroid-like sense, but it’ll offer you a fair few hours for a very reasonable price. There are imperfections that will lead to frustrations, but there’s plenty more here that makes this a pretty interesting play.