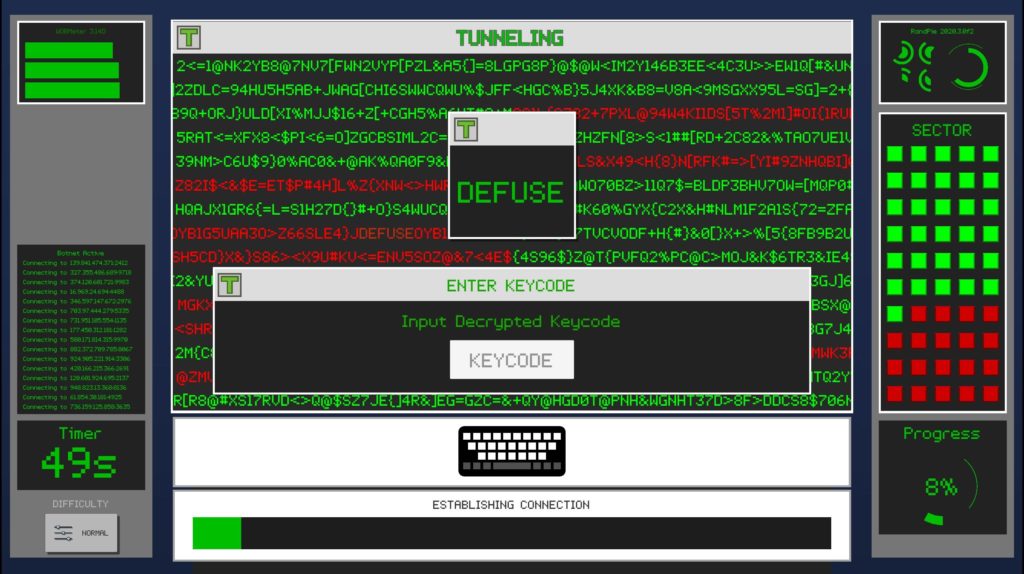 I have a weakness for investigative games. Show me an app that pretends my phone is someone else’s lost phone, and I’ll happily while away a few hours picking through the narrative threads of that fictional life. Or better still, blur the lines between a game and the real world and have me solve a mystery. Honestly, it doesn’t matter enormously if the story is bad, I just love the process.

Greyhat is an odd mixture of the two sub-genres mentioned above. It acts like it’s a line-blurring investigation game, but performs like a lost phone mystery. In it, you’re pretending to be a world-leading hacker, who breaks into people’s computers in order to complete assignments, whether that be framing someone, changing student grades, or leaking big pharma secrets. But it’s all confined to the game, played out in a super-simplified universe, a locked-down reality where there’s no Google, just puzzles to solve and answers to find.

The story isn’t great. You begin as a family man, father of a super-smart daughter, husband to a loving wife, who hacks in his basement to make “CatCoin”, with an aim to earning enough to quit and open a family bakery. That is until you cross paths with a mean baddie rival who wants to end your ‘career’. Which, completely inexplicably, he does by kidnapping your child from outside her school. Er, gosh.

Everything falls apart for our hero when the daughter is not found, the marriage breaks down, hope is lost, and then it’s ten years later and you’re chasing down your last lead to find the kidnapper. You’re performing tasks for the FBI in order to get access to a file. And, rather impressively, the contents of your email account haven’t changed in the intervening decade.

It’s silly details like the last that mean Greyhat completely fails in its goal of creating a believable world – its ambitions are far too big for its scope, and its story is to complex for its ability to deliver. And yet, despite all this, I’m really enjoying the process!

My disbelief is so suspended as to almost reach the bottom of the ravine, but it doesn’t change the fact I just enjoy the process. That the “hacking” involves pressing keys on either side of the keyboard to match a scrolling pattern on screen, occasionally interrupted by needing to type in a word that appears, is deeply silly, but I’m fine with it! That you “decrypt” corrupt images by doing a bloody tile swapping game is monumentally stupid, but hey, when I finish the picture reveals an import clue for cracking into someone’s account!

The nature of these lost phone games – which Greyhat is, just wearing a different outfit – is that the information required to make progress is necessarily overt. You need to find a password, and the reminder says it’s going to be made of their cat’s name followed by their mum’s birthday, so it’s going to have to rather painfully let you find out their cat’s name and mum’s birthday. And since it’s not blurring with reality Black Watchmen-style, since it can’t hide that information behind all of Google as the best games in the other sub-genre do, it’s going to be a touch on the nose about providing that information. Oh look, here’s a photo of his cat with the filename “MeowMeow” (tragically a real example), and look, on his calendar, it has “go to mom’s party” or whatever circled. It’s glaring. And I still enjoy doing it!

It’s farcical, in a way that Alice & Smith’s games aren’t, but it’s still cool to get the right password, to log in to the account, to put in the web address of the convention to get the attendee numbers… Nothing in the first two chapters is close to difficult, which I think is Greyhat’s actual real problem, but it’s still satisfying to have done it.

There’s a nice detail that you can respond to the frequent IM chats in a positive or negative way, decided by on which side of the keyboard you start randomly banging keys to make the sentences come up. You can choose to be a dick, or be generous; to be furious with an enemy, or calm. It makes a difference to how you experience the story, if not the story itself.

And that story never gets any more sensible. One minute you’re causing dozens of potentially lethal intersection pile-ups to slow down one car, another you’re, er, averting nuclear war? Oh it’s just ridiculous. Still, I enjoyed it!

It’s a lengthy game, and while the story never gets any less ludicrous, the quality of the puzzles absolutely improves toward the end of the second chapter. There start to be some more subtle details to spot, some slightly more convoluted routes to finding the piece of information you need. Unfortunately it also starts repeating ideas, having you search through the same paper-thin website of a mobile phone manufacturer, or download the same piece of scanner software, in multiple missions.

After an unfathomable number of hours and missions it starts introducing some neat elements I’ve not seen used elsewhere, like getting access to someone’s phone assistant history, letting you see what questions they’ve asked and the answers provided. There’s a neat puzzle finding someone’s location by distances from cellphone towers. There’s a borderline impossible one requiring the musical ear of Mozart, although I’m told an option to skip that should be added tonight.

Near the end there’s a great puzzle in which you have to work out a cypher based on family trees and cult scripture. Sadly it then fell apart when it failed to recognise a correct answer, I think because it made a mistake in its random assigning of letters to symbols in that instance.

This last part does actually point to what is perhaps the most impressive detail of an enormously detailed, if always daft, game. It randomises a huge amount of the content, such that the solution to each puzzle could be entirely different on a second play. This is as broad as the identity of a murderer changing each time (I’ve tested this, and it really works – the clues change, and point to a different candidate), and as specific as that keypad tone puzzle I mentioned actually generating a random order of tones in the background of a recorded message with actors speaking over it. Crikey.

This really does sum up Greyhat. SO much work has gone into it, yet so much needed to be taken out of it. It’s far, far too long, and would have worked much better with about a third of the missions removed. Yet minute by minute, I had a thoroughly good time taking copious notes and then putting all the pieces together to solve each mission. Its story is outrageously idiotic in ways I won’t spoil, but if you think it starts off daft, you haven’t seen anything. But that’s kind of fun?

With a hefty edit, this could have been a silly but super-fun lost-phone-meets-hacking adventure. As it is, it’s woefully bloated, but still has that super-fun game inside it.