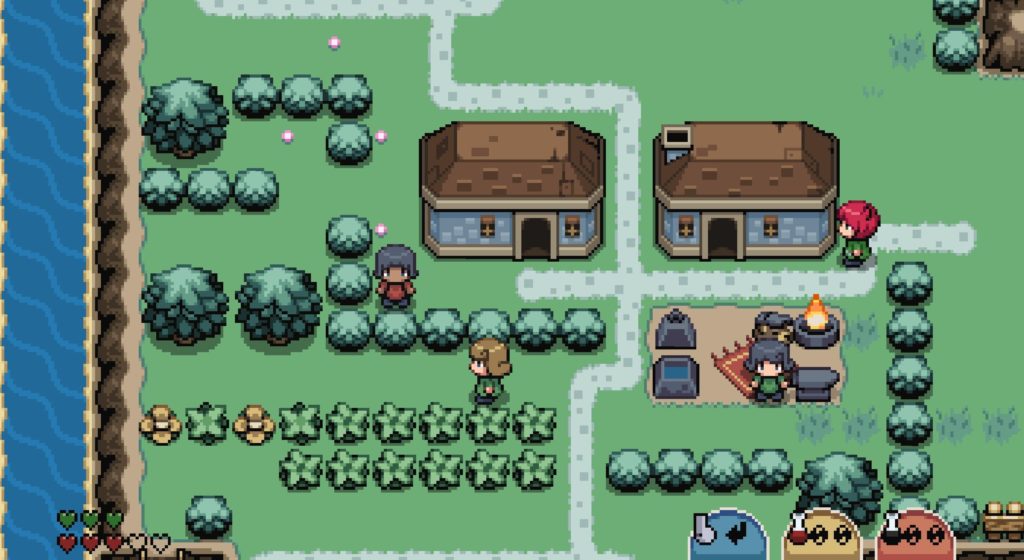 August’s inaugral entry in the Buried Treasure Ultro Game Club was Lenna’s Inception, a Zelda-me-do in a randomly generated world.

The wonderful BT Discord community generated a huge amount of discussion about the game, yet all civilised and upbeat, because gosh darn it if it isn’t the best gaming community on the internet. You should join in too.

Anyone who wanted to was invited to contribute their thoughts about August’s book game club game, and here are the month’s crop of excellent comments, reviews and musings.

When playing Lenna’s Inception, I was struck by how much it seems to have been designed with speedrunners/randomizer-runners in mind. I feel running through it once doesn’t quite do the game justice, the experience is probably more interesting the more times you go through it and learn what the generator does (which becomes a sort of metagame). Without that repeat experience, the dungeons (which were randomly generated based on a seed) lack the focused design that Zelda’s dungeons excel at, and so it never quite reaches those highs. But overall it feels very fun and fluid to play, has a great sense of humor throughout, and the glitchy stuff is implemented very well. My favorite parts came near the end, when the game glitch mechanics were utilized in intentional ways, and the story went weird, in a good way.

Lenna’s inception has its merits, particularly the use of glitches commonly used in speedrunning as core game mechanics, and the tongue-in-cheek story. However, it is going to be overshadowed forever in a world where the A Link To The Past Randomizer exists (although it is not really a fair comparison as the legality of the latter is questionable).

I liked that instead of relying purely on pointing at the source material and winking, Lenna’s humour and story very much go off in their own direction. As someone who’s never played the NES-era Zelda games I didn’t find that at all a detriment to enjoying it (although it probably does help to have some knowledge of 90s Nintendo gaming in general, with some of the references to Pokemon glitches etc…).

While it was a bit too easy, I found the real appeal of the game was seeing what the story and side quests were going to come up with next, so I’m perfectly happy to be taken on an easy-going ride. The proc-gen did make the actual level design a bit hollow – personally I’d have preferred a hand-crafted experience.

I played Lenna’s Inception as someone who has never gone through a Zelda game. As such, I probably missed a lot of the references while maybe not finding it as repetitive as other people. I enjoyed the sense of exploration that the game provides, even if at the end of the day that exploration is not necessarily taking you anywhere in particular. The best parts of the game, however, are in certain small discoveries or encounters (that I don’t want to spoil), rather than in the overarching storyline or experience. On the other hand, the combat and the puzzles are not particularly creative or interesting. I also enjoyed an atmosphere which finds moments to be funny and also somewhat serious. I’m very happy I got around to playing this as the first game of the Ultro Game Club and I’m sure there is a lot more left to discover in it.

Metatextuality in games became so common that it’s more of a stylistic choice than a revelation, especially as the big boys within the industry capitalized on it to nostalgically trap its loyalists within its insular ecosystem. Though Lenna’s Inception relies on copyrighted material to exist, it’s (thankfully) not beholden to an established canon. Though its design language is familiar, it’s the idiosyncrasies of Bytten Studios that makes it a pleasurable experience. Procedural generation, absurd bosses, functional glitchiness, and witty flavour text differentiate this game from others like it. Combined with solid gameplay and a delicious story, this experience offers several hours worth of cheeky entertainment.

Even though metatext in games isn’t revolutionary, it certainly makes me think about what tropes are often taken for granted. In Lenna’s Inception, this approach feels more like a style than a statement, and that’s okay! Nods to popular games I haven’t played but know enough about was good and all, but at its core, it’s simply a wonderful game. There are rather neat elements that make this quite an idiosyncratic piece, but it’s the writing that stood out to me. The fourteen-or-so entries in the bestiary made me laugh in a way I haven’t in awhile, and that alone was worth trying this game out. After the first playthrough, I watched a speedrun only to find out there are more endings and extra tidbits I missed. I somehow ended up in the developer’s Discord, with some folks encouraging me to explore this game more. What I thought would be a lil’ romp to check an item off my backlog has expanded into becoming a part of a new community.

It feels weird to complain about a game that’s so obviously a love letter to a series I’ve never played before, but going through some sections of Lenna’s Inception felt at times like hearing a long inside joke I couldn’t quite get, even after all the nods and winks.

The art is lovely, though! The tunes are catchy and there are great little touches everywhere. There’s so much care put into almost every aspect of the game that it makes me wish it was more willing to do its own thing. I would love to see that – perhaps in ByttenStudio’s next project?

And if nothing else, I’d like for every RPG from now on to also feature a cellphone that allows you to remotely update NPCs on the status of their petty errands. What a clever idea.

Thank you to everyone for your contributions! And to the many, many more who joined in the first month. And most of all to TeeMan for organising the whole thing.

September’s Ultro Game Club game, as voted for by Discord users, is… Secret Little Haven. It was in the BLM Itch bundle, so you likely already have it. If not, it’s $5/£3 on Itch and Steam. There will be a post about that soon.