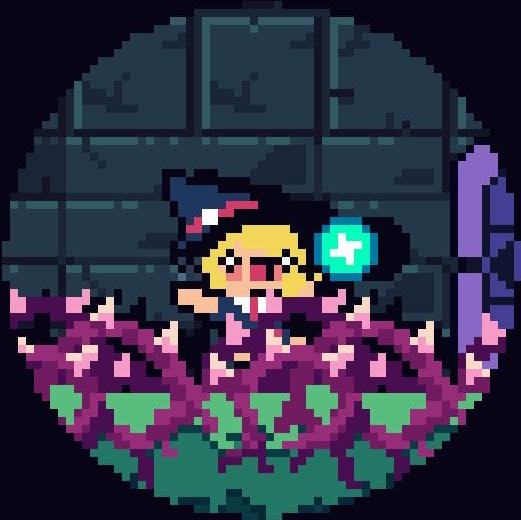 I’m a sucker for a charming Metroidish platformer. And I’m always up for an interesting new puzzle game. WitchWay offers both in one rather lovely package – a brilliant combination of jumping and solving, all through the magicks of a rather adorable witch.

Your witchy character has a magic wand, that when zapped can ‘possess’ certain blocks within the game’s levels. That done, you now essentially play as the block for a bit, manipulating and rearranging the furniture such that you can climb to a higher platform, or float your way past a laser beam. Or indeed it might work the other way around, where you move the blocks to redirect such beams, or puzzle your way to manoeuvring a collection of cubes through the level until one can reach the end.

Each game type has been done plenty, but it’s really interesting to see the two combined, and so very effectively. It also helps that you’re there to rescue bunnies.

The game is three years old now, but it was recently unearthed by one of Buried Treasure’s elite team of Discord spies, and I’m really glad they did. (Thank you Slug Camargo, you very reliable source of goodness.) It does an awful lot in a very tight space, with impressive skill.

I’m especially enamoured with how open it is. It’s a surprisingly large game, and I think they’re a little modest when they describe it as “2.5 hours”. I think there’s a fair amount more than that in here, especially if you’re not some sort of elite platforming genius type. It sprawls in many directions at once, and doesn’t have them all gated – get stuck in one area and there’s a good chance you can wander off somewhere else and pick away at something different for a bit.

The only weakness is the lack of an easily accessible map. Yes, each location has a small portion of the map etched into one of its walls, and there’s a large map room where it can all be seen together, but this seems unnecessarily unhelpful. I wish I could just pull it up whenever, because it’s awfully muddling to know where you are in relation to where you were last stuck.

That aside, this is a gem. And a cheap one, too. Sadly plans for a sequel have been shelved, seemingly as the team of four that made this one went in different directions. But a gorgeous little thing was created in the right moment, and it’s well worth grabbing now.