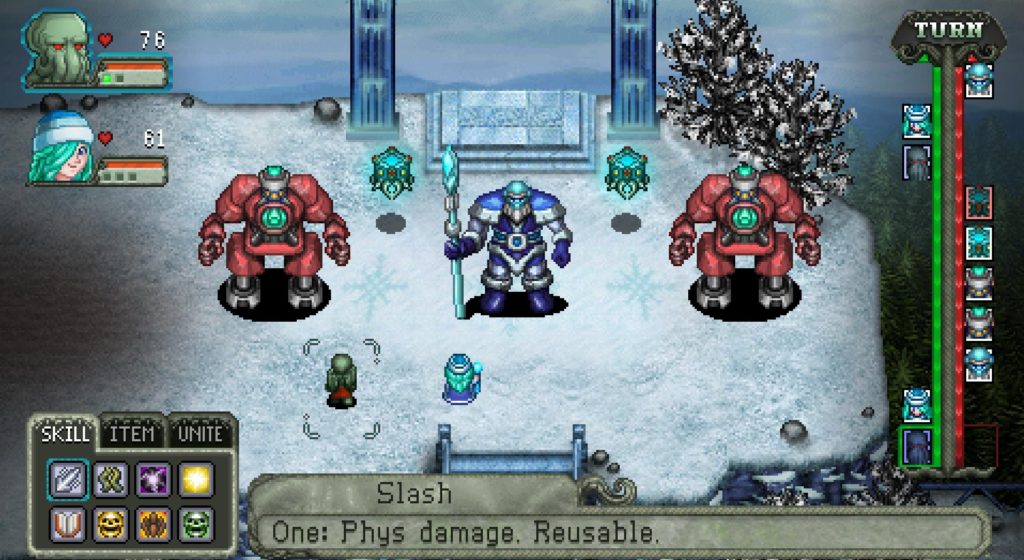 There was a time, way back when in 2011, when we all weren’t so utterly sick of Lovecraft-based games. A time before it was more fun to point out what a massive racist wad he was, than wearily describe yet another game in his wake. And at that time, the splendid Cthulhu Saves The World was released. It was an utterly hilarious, a ‘J’RPG in which the cosmic entity, robbed of his evil powers by a wizard, was forced to try to be as virtuous as possible in order to get them back.

This completely daft and contradictory quest was the basis for a game that merrily mocked not just the myth, but also RPGs themselves, while – crucially – being a really good one. Some eight years later, developers Zeboyd have released a Christmas special in the same universe!

Well, not only the same universe, albeit with improved graphics and interface, but the same story! Except this time it first seems like it’s Father Christmas himself who’s stolen his powers, and it’s Santa’s granddaughter, Crystal Claus, who Cthulhu is forced to help to his utter disgust. You see, the League Of Christmas Evil has kidnapped the big red man, and it’s time to save him, and bally Christmas itself.

So begins a much more rapid, shorter-form reworking of the original, this time with snowmen and incredibly terrible festive puns. Along with the genre-mocking self-deprecation that I look for in a Zeboyd game. It kicks in straight away, with Cthulhu (who’s true evil is forcing me to type his name out repeatedly) using his RPG knowledge to his advantage from the start.

“You talk big,” he says to Evil League member Jack Frost who appears very early on. “But this early in the game? There’s no way that you have the stats to back that up.”

For a four hour game it’s impressively complex. Battles are turn-based, traditional JRPG style, but each of your abilities can only be used once until your character rests in battle, meaning you need to time when you use each of them. This is exacerbated by the Insanity abilities, only triggered after a certain number of rounds, and randomly assigned to your character in battle based upon which abilities they don’t currently have equipped. Add to that the seven ailments with which you can afflict enemies, and how each must be cumulatively applied, and how they also develop matching ailment HP to make it harder to repeat the same ailment in the same battle, and…

Or you can just switch the difficulty to ‘Sane’ and not really have to worry.

Other aspects are somewhat reduced down by is shorter running time. It’s aiming to be about four or five hours long, a simplified version of the format where you go on short runs through locations, gathering equipment from chests, and eventually finding a boss battle. Win that and you return to the game’s Christmassy hub where you choose daily activities that also score your team new gear. Rinse, repeat.

The combat, once you’ve got the difficulty up to Insane (which is this game’s Normal-to-Hard), is a meaty challenge, but the real motivation here is the gags. I’m tempted to spend the rest of the review just quoting favourite lines. But check the screenshots for some of those.

There is a small issue here. This game costs a reasonable £6.50, which is a very fair price for such a dense few hours of play. But the bigger, more involved, and just as funny Cthulhu Saves The World only costs 59p. And if you’ve not played either, I’d definitely recommend the former. When games are this retro in design, that it’s eight years old really makes little difference.

Of course, if you played Saves The World way back when, then of course this is an absolute must. And I recommend getting the GOG version, as that comes with a free copy of their more recent Cosmic Star Heroine too!