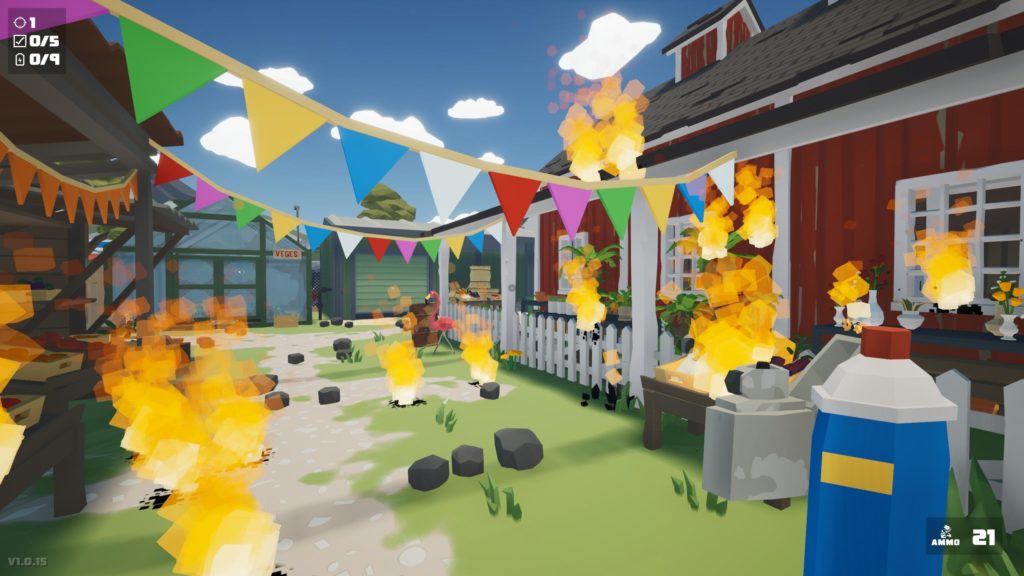 Well I’m delighted to report that Kill It With Fire continues along the suggested trajectory of its excellent free demo, Heatwave. This is a game about squishing spiders, whether with a clipboard, frying pan, or molotov cocktail. It’s an extremely silly, deeply satisfying, often scary (if you’re scared of spiders) game of wanton destruction and mayhem.

I don’t know if your first reaction is the same as mine: “But it’s not OK to kill spiders! You can’t just go squishing them!” Hopefully your second reaction is, “Oh yeah but I play all those games about shooting men in the face,” and then you realise how silly you’re being and allow yourself to have fun.

And this is really all about fun, rather than some grizzly series of hardened challenges. In each of the ever-ridiculous levels, you’re given a setting (apartment, convenience store, sprawling garden…) and the core task to kill a certain number of spiders. That could be with a frying pan, or it might be with a double-barrelled shotgun. Then as you play more goals arrive, from burning a certain number of objects, or smashing up enough of a kitchen’s crockery, to scanning expensive items in a shop or blowing up a propane tank.

It certainly is a one-joke game, but dammit it’s a good joke. Bloody spiders jump out at you, the musical sting accompanies the shock, and you enter a frenzied panic of dashing about whacking things at it until it’s dead. Or you burn everything and watch the little legged fireballs skitter about until they can’t.

As things progress the levels get larger, or more involved. By the end it’s a full-blown mystery. And there’s the all-important need to return to earlier levels with latterly gained equipment, to tick off tasks that seemed impossible before.

This is facile, but in the best way. A big, dumb, silly game of making a giant mess. And that can prove pretty cathartic – getting to smash up stuff is always a fun release. It reminds me of that children’s game show of the early ’90s, Finders Keepers. And who doesn’t want to get to do that? Plus arachnid genocide.

It’ll only take two or so hours to run through a first time, but there is a decent amount of value in going back to earlier levels with new equipment. And while £11 is a very fair price for a game with so many settings, and a mind-blowing number of modelled assets, I do worry it’ll be perceived as slightly too expensive for what it offers. Still, you can play the free version and make up your mind if you want to pay for more.