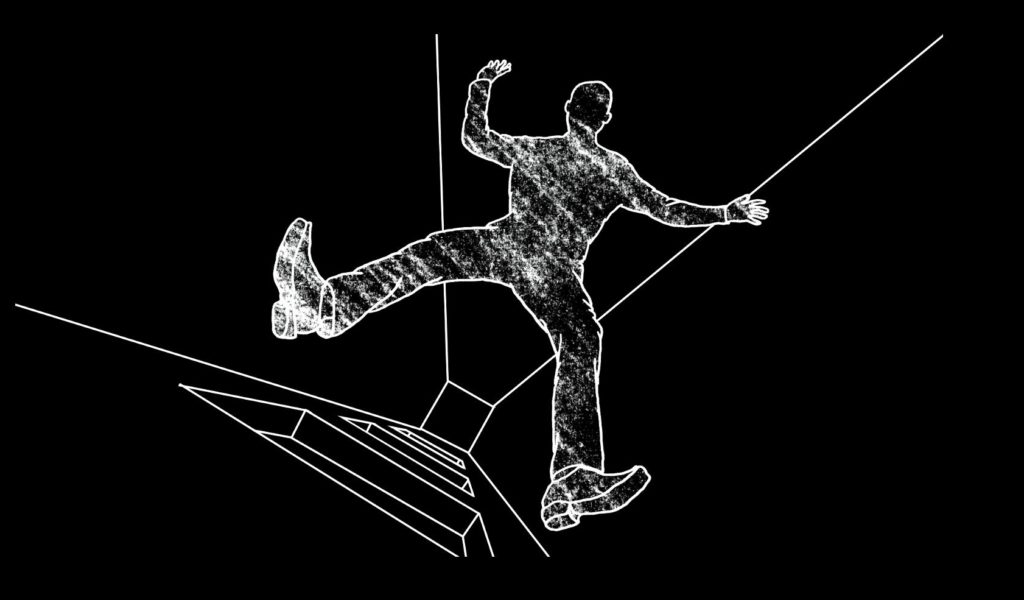 Describing itself as an “Essay Game”, The Last Survey is what we’ve for some reason taken to calling a ‘visual novel’. Whatever it might actually be, it’s remarkable, and contains some of the finest writing I’ve seen in a long while.

This is the tale of a geologist, on a retainer with a Brazilian mining company, tasked with providing a survey on the reserves in their rare-earth metal excavations. The survey is complete, and he or she waits in the reception on the 19th floor of the company’s executive headquarters, about to present the findings to the CEO, Victor Ferreira.

What follows is the internal monologue of the geologist, accompanied by over 1500 hand-drawn pieces of animation art, the black-and-white line drawings transitioning in morph-like evolutions, illustrating the text both literally and metaphorically. This is occasionally interspersed with speech from others, and very occasionally, a dialogue choice for you, the player, to make. Its hour or so of story is barely interactive, perhaps five or six moments where you intervene, and yet I so highly recommend playing this. If there’s still an ongoing argument about whether visual novels are ‘games’, then The Last Survey is the conclusive answer.

(The reality is, there’s no other format in which such a project could be presented. Games are where these work, no matter how limited the interaction, not least when they’re as visually interesting as this. Radio would perhaps be the only medium in which a monologue could be similarly well presented, but it wouldn’t offer the scant choices, nor the amazing animation. They’re games. Let’s not ask the question again.)

The art is splendid enough to recommend the project, but it would have been with some hesitation were it not for the strength of the writing. It’s quite, quite brilliant, and creator Nicholas O’Brien is a rare talent. Coming from a background of avant-garde cinema and visual arts, if anything The Last Survey plays things very modestly – there is nothing needlessly esoteric here, while coming from an artist who has previously offered “a 5-channel video installation about Green infrastructure in NYC at the Knockdown Center in Queens”.

In fact, “essay” is a splendid word to describe much of what you’ll experience. This is clearly a project born of extensive research and passion, its knowledge of the impending disasters we face as we exhaust rare-earth metals matched by an understanding of the corporate condition. It speaks with such precise insight into the psychology of CEOs, of the hopelessness of presenting bad news to a force driven only by bottom lines. And perhaps most importantly of all, it’s such a pleasure to read.

“Victor – like most executives I’ve met – was a quarry of cognitive dissonance. You could smell the miasma of doublespeak seeping out his pores.”

“His talk was engineered to be that way; manufactured out of a careful verbal lexicon of convincing neutrality. For Victor, language was a mirror: a shield of glass that could tilt this way and that to re-present the best vantage of yourself back to you.”

“I projected my humility into every corner, squeezing the door handle as tightly as I could, imagining the force of my clenching fist directly correlated to the strength of my modesty.”

The Last Survey was originally released in-development on Itch in 2018, and has now come finished to Steam. It’s the result of a successful Kickstarter, and is accompanied by an extraordinary soundtrack by Lewis Kopenhafer. (It’s such a massive shame that there’s no OST option on Steam as yet, because I’d gladly listen to this minimalist soundscape outside of the game.)

You’ll think about a subject you likely often don’t, yet one that is soon to have such massive implications for all of humanity. And you’ll not feel berated or lectured at as you do so. Because The Last Survey is as much about its subject matter as it is its portrayal of human behaviour, of paranoia, fear, and the desire to do the right thing at personal cost. Also its damned good writing with some fantastic animation, presented in a way impossible outside of the realm of gaming.