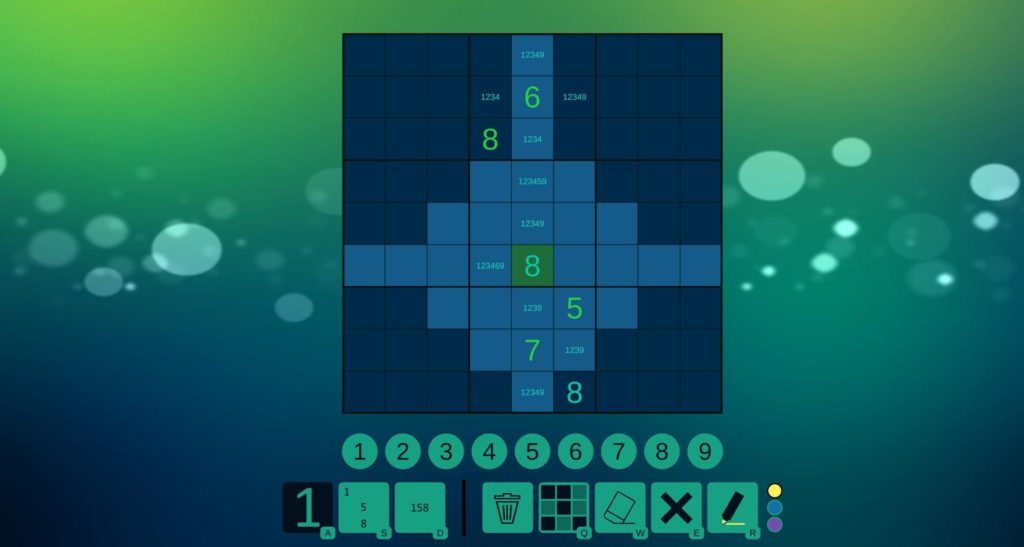 There was, last month, a rather delightful fuss made of a YouTube channel called Cracking The Cryptic. Human quizmen Simon Anthony and Mark Goodliffe, calmly and pleasantly solving super-difficult puzzles, became a news story. It turned out to be the most perfect lockdown viewing, two really friendly guys being smart for our entertainment.

The infinitely lovely Alice B of RPS fame put me onto the channel around the same time, and I’m so glad she did. They’ve proven a haven in this newly reterrified world, and I’ve fallen head-over-heels in love with Simon Anthony’s bursts of ebullient delight when he spots paths to success in tricksy puzzles.

So of course I also checked out their apps, released under the name Studio Goya, and discovered some really lovely collections of Sudoku-based puzzles. And best of all, they’re paid-for apps, rather than advertising-spammed collections of microtransactions.

I should say that of all logic puzzles, a regular Sudoku is perhaps my least favourite. I’ve always preferred them with some sort of twist. Not because I’m a lunatic who thinks ordinary 9×9 grids are somehow too easy – if anything the more I play the variants, the more I realise how little I know about the complexity of the original form. I just find they’re always one element short of the sort of puzzle I want to be playing. Which is why adding one extra feature turns them into something I really enjoy, whether that’s the grids of a Killer Sudoku, Kakuro, or a real favourite, Killer Sudoku Pro. The Cracking The Cryptic guys have introduced me to three new variants: Thermo, Sandwich and Chess Sudoku. And with Miracle Sudoku, they’ve brought all three together for a really interesting combination of puzzle types.

Things start of easy… ha ha, no they don’t. The very first puzzle is a proper chew-toy, with the Non-Consecutive variant in place, where normal Sudoku rules apply, but you can have no consecutive numbers place adjacent to one another. Rather than gently easing you in with a puzzle you can easily boff out, I found myself in a right old tangle with this one, eventually discovering I’d gone horribly wrong. However, come #2 they combine Non-Consecutive with Thermo – my favourite of their previous apps – to offer something that took me a mere 22 minutes to solve. Now, let’s be clear: my fondness for these puzzle types does not translate to innate talent. 22 minutes will likely prove a very poor time for those far more adept than I. But hey, I get more time for my buck than them, so ner.

#3 offers Non-Consecutive with their other splendid focus, Sandwich. Here it’s normal Sudoku rules, but the numbers between the 1 and the 9 in any row or column have to add up to the relevant total outside the grid. Yeah, it’s as complicated as it sounds. By #4 you’ve got the Chess Sudoku rules invading, worrying about the same numbers being knight or king moves away from each other! By #4 I was in trouble.

But what’s important here, and indeed in all other Goya products, is these are deliberately hand-crafted puzzles. They’re, for want of a better term, puzzles with a narrative. You’re meant to spot the little details, the clues seeded in the starting grid, and then the revelatory moments that appear throughout on key discoveries. This is so much the case that when they write the hints for the puzzles, they present them in the order in which they expect you to come across the next breakthrough moment. A regular Sudoku might be approached from all manner of angles, and that’s true for certain aspects of these – but these are unquestionably crafted with punctuating moments in mind. However, in this latest game, I have had some real trouble understanding how the hints apply. They seem to make some leaps of logic that I can’t keep up with.

Early on, while it never goes easy on you, it’s at least polite. That first non-consecutive sandwich has a very sparse grid, just eight numbers filled at the start, but in there is a nice juicy clue:

That third row down, with the 9 and the 6 on the far side, and the 29 on the left. That’s your gimme. Because if the numbers between the 1 and the 9 have to total to 29, and you know already the 6 isn’t part of that, then you’ll also realise there’s no other option than to put the 1 on the far left. Because there’s no other way to reach the number 29 without adding all the remaining numbers together. 2+3+4+5+7+8 = 29. So they all have to be there between the 1 and 9, and the 1 can go in.

You’ve also got the second column, with its 30 at the top there. The numbers 2 through 8 add up to 35, so you know you’ve got to miss out a total adding up to 5. Usually that would mean 2 and 3, or 5 itself (since 1 and 4 isn’t available in Sandwich rules, the 1 always the bread). But because that 2’s already filled in, and there isn’t room to it all above the 2, you know it’s got to be the 5 that’s left out. And to do that, you’re going to have to have the 5 at the very top or very bottom. Oh, and the sandwiching 1 can’t go at the top, as there’s already a 1 in there thanks to our filling in the third row. So it has to go at the bottom, and because of the non-consecutive rule, can’t go next to that 2. So the 1 goes at the bottom of the column, the 5 at the top, and the 9 right below the 5.

It’s meticulous details like this that are required, and remember these are the starting puzzles. It’s always about unpicking the thread, finding the loose end, and pulling on it to see how much will unspool. And if that’s what does it for you, and you’re better at these puzzles than me, then grab this with both or even three hands. If you’re not better, then perhaps consider getting one of the others, especially Thermo or Sandwich.

Oh, and rather importantly, this is a Sudoku app that’s a pleasure to use, and that’s all too rare a thing. The UIs on the vast majority of them don’t seem to have been designed by people who actually use them, but that’s not the case here. There are all sorts of shortcuts, ways to play with mouse, keyboard, or both, along with a variety of ways to add notations to grids. It feels like exactly what it is: a Sudoku game made by people who play Sudoku all the time.

I find myself narrating the game out loud as I play it. “Oh, that’ can’t be 2! Because that has to be 2, 5 and 6! So THAT has to be 2!” And I realise how much I sound like I’m cosplaying Cracking The Cryptic. And I’m OK with that, because no one can hear me, and you won’t tell anyone else about it. And I’ve not got anywhere into its current 40 puzzles, because they’re going to take me around seven hundred hours each. However, a lot more time has gone into Thermo Sudoku on my Android phone, and I’ve started picking away at Sandwich Sudoku too.

You can apply the positive words of this review to any of their products. They’re all the same design, and all feature a collection of hand-made, extremely finely crafted puzzles, and they play just as well on phone as they do PC. Miracle Sudoku combines all these puzzle types in interesting new ways, with a focus on trying to include as few starting clues as possible, but I think it gets too difficult too soon. You could of course argue this is one for the experts, and they deserve puzzle games too. Either way, these are top-quality products, and all a fiver very well spent.