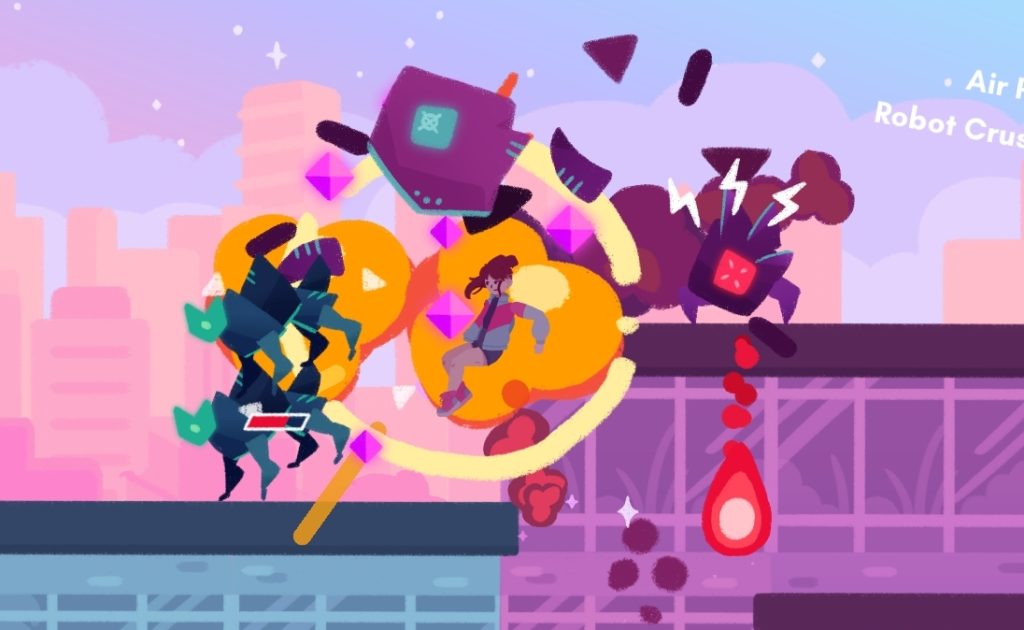 Well, I wasn’t expecting that.

What looks like it’s going to be yet another super-tough bullet-hellish side-scrolling platformer turns out to be something incredibly special, for a really interesting reason: it wants to be won. It helps that it’s also a game about a woman trying to rescue her indifferent cat from an alien.

Obviously tough-as-nails platformers are big business the last few years, and there’s clearly a huge demand for them. There’s a broad audience that wants games at a difficulty level beyond the average player, whether they be linear experiences like Cuphead, or ludicrously vicious rogue-lites. And good for them, I’m really glad a need that clearly wasn’t being met for a while now is. And yet, as someone who just doesn’t have the patience or skill to master such games to a competent level, I look at them through a frosted window, sadly thinking how much fun they would be if only they’d let me in.

Super Crush KO, despite its fantastically obnoxious name, lets me in! And it’s hard to say just how much happiness this has brought me. This is a frantic, fast, combo-driven combat platformer that is astoundingly accessible. I’m not going to say “easy”, because actually, I think I’ve been getting quite good at it as it’s gotten tougher. Because I really believe this game has one of the best difficulty curves I’ve ever encountered in the genre.

SCKO is about two core truths: 1) Cat owners will do anything to save their pet. 2) The cat could not care less whether you save it or not.

At the start of the game, Karen’s apartment wall is blasted apart, and a green-skinned alien lady – brilliantly named Ann – grabs her beloved pet Chubbz. Because this is in the near future, Karen has a laser blaster. We all will in the near future. She grabs it, and sets off across the city to reclaim her kitty. But Ann is prepared, and has brought thousands upon thousands of robots to aid her getaway.

This means that in the side-scrolling action, you’re required to blast, pummel and biff your way through those metallic hordes, while avoiding a mad spray of enemy attacks and fire. Which is usually something I start off thinking will be a great time, before realising I apparently wasn’t born with the correct combination of genes to be able to do this. But not here! If anything, it’s certainly a little too simple for a little too long. But in that process, it introduces all of the skills necessary in a calm and approachable way.

So rather than being bemused by seventeen different controls all at once, I was gradually taught the many different attacks available, and the way attacks can be used to increase movement, such that I felt I had a good grip on it by the time things got frantic. Which has led me to a place where I feel supremely competent, and delighted with my progress.

Another ingredient that’s so important here is that you can touch the enemies. They’ll only hurt you via contact when they’re in their red attacking mode, and such moments are flagged by each type in their own ways. It makes a world of difference, not having to dodge everything like every other platformer, where all enemies are apparently covered in an invisible layer of poisonous spikes. Here there are plenty of ways to get hurt at any point, but you can use good sense, and noticing the flags of the fifteen bads on screen in any moment isn’t exactly child’s play.

Oh, and it’s worth adding, like something from the mysterious past, the game has no rogueish elements at all. You’ve five lives at the start of a level, dying restarts you at the last checkpoint, and lose all your loves and you just start the level again. OH MY GOODNESS, SUCH THINGS!

If you’re someone who thinks Risk Of Rain is a breeze, or wants a harder difficulty mode for Dead Cells, then absolutely avoid this. You’ll blitz through it and think it fluff. PLEASE do not buy it. Because this one’s for everyone else.

If you’ve ever fancied feeling the sense of getting good at this sort of game, however, this is such a gift. Yes, it’s a touch repetitive in its range of enemies, but each requires a different approach, and the tougher beasties don’t overwhelm you too early on. It’d be nice if the backgrounds changed a bit more than they do across the 20 levels, but I enjoyed the bright and breezy art. And I feel sure some will complain that the controls are “floaty”, but that’s a key part of what makes this feel so possible – it slows down the necessity for super-human reflexes in a really important way.

Oh, and of course, there’s extra challenge available. The game constantly assesses your performance in the form of your combos of hits without being hit, grading you at any point from D to S, and then doing the same for the level overall. There are level markers for completing without getting hit at all, without ever losing a life, and in a certain time – so there’s plenty of room for increasing the challenge within its own generation framework.

I will confess that I’m stuck on the penultimate level as I write this. I’ll get through it – I know I can do it. And I do kind of wish it had gotten tougher before the fourth and final chapter, despite my revelling in just progressing for so long. And I should point out that the boss fights are not a sticking point, which again is flipping unique. Of the three I’ve completed, I did the first and third first time, and the second took two tries. I’m the worst at boss fights. This pleased me greatly.

So avoid like the plague if you’re from the bawdy “git gud” disaster race. And really, if you play this sort of game regularly and well, this will likely feel too short and simple. But for everyone else, hooray! A way in! Yippee!