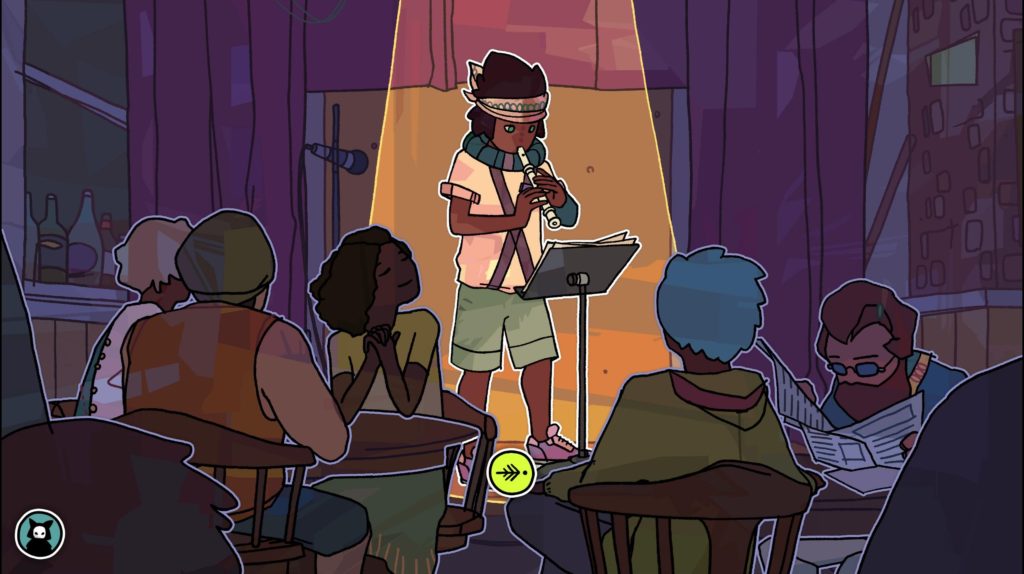 Signs Of The Sojourner is something very special. It takes a format – the deck building genre – and reveals a vocabulary within it that has previously been, at best, tacit. It’s a game about growing up, changing, evolving, and grieving, and it conveys all these things through a collection of geometric shapes.

I’m a later convert to the world of deck-building, and still prefer the games that lean simpler in this genre. When it comes to fast-paced action, I don’t mind losing all the time, but it just never seems a good fit to something as carefully planned as this trend of card games. Signs Of The Sojourner takes a whole other angle: it makes success something far more complicated to perceive, rather than achieve. It’s also a game about conversations, not combat.

Putting me in something of an awkward position, Sojourner’s mechanics go deliberately unexplained at the start, forcing you into some degree of experimentation in how you actually play, which is an integral part of the whole meta-narrative. So I’ll be careful. But you could always just trust me, stop reading here, and go buy this. Like I say, this is special.

At first appearance, it feels exceptionally simple. You have cards with one of two symbols on either side, and play them alongside one another, matching or failing to match the symbol. Match them in rows of three to six (depending upon the conversation) and you’ll have more positive responses from the person you’re talking to. Mismatch and things are more negative. Later more symbols are introduced, and extra elements are applied to the cards. Safe to say, it gets much more elaborate. But not be becoming more complicated – instead by becoming more nuanced.

Why you’re doing all this is rather bittersweet. Your mother recently died, and the curio shop she ran is now yours. Your mother would regularly set off in a caravan of vehicles that drove from town to town, picking up interesting items as she went, that she would sell in the store. Now that falls on you.

Joining caravan leader Nadine, and a collection of other characters, you set off on weeks-long journeys out of town to find treasures to bring back, as well as form relationships with the residents of these nearby small towns. All of this is conducted through the card game, and how you balance your deck of ten cards will determine how well you can communicate with different characters. Because, and this is where Sojourner becomes magical, the further you travel, the more frequently you’ll encounter characters who play cards with unfamiliar symbols.

This leads to something that knocked me backward when I realised it. The further I went, the longer I was away, the more muddled my deck of cards became. And as a result, the harder it was to talk to the people in my home town. And oh my goodness, see? What an extraordinary analogy.

Where you go, for how long you stick with the caravan, or if you just travel off without them, is all up to you. There’s a lot of freedom here to play the game your way, whether that’s just trying to find enough stock for the shop in the nearest towns, or heading way out into the desert for new novelties, characters, and dialects. The farther you go, the more tired you become with weeks of travel, and the more fatigue cards infiltrate your deck, forcing you to be unable to conduct conversations as well as you might have otherwise. Which, again, just wow. You end up irritating people more when you’re tired. Because, you know, that’s true.

There are events that take place on specific dates in specific towns, and you can manage your route to be there for them – sticking with the caravan usually helps with this. Or you can miss them entirely, show up a few days later, and the townsfolk will be talking about the repercussions. It makes the game feel alive, and your part in it smaller, less omnipresent, and in doing so, more personally important. You’re a character in this tale, not a passive recipient of it. It’s not all about you.

In fact, so much of this is about how other people affect you. After every conversation you take a card from that other person’s deck, to replace one of yours, even when you don’t want to. Your encounters change you, affect your vocabulary, change how you go on to speak to others. Who you spend most of your time talking to affects how you talk.

This is all emboldened by a lovely cartoon art style, clear presentation of the cards no matter how elaborated things become, and some really strong writing for the dialogue that takes place betwixt the card games.

More than anything else, Sojourner bubbles with character, a sense of place, and a deeper notion of the temporal nature of our home towns. It communicates the muddle of happiness and loss that comes with aging, with wanting to find your own life, while clinging on to the one you have known. And that it does this vial some diamonds, squares and spirals on playing cards is utterly extraordinary.

It’s a game I want to play again and again, exploring all the possible variations, behaving in different ways, experimenting with deliberately antagonising particular characters by purposefully playing bad hands. I want to make friends with those I lost before, and infuriate those I previously befriended. I want to live inside it for as long as I can, in as many ways as I can.

This should be everywhere. It should be the indie darling of 2020. And while there’s certainly something bittersweet in this immediate moment in playing a game about moving about, talking to strangers, and the intimacy of conversation, if anything it’s reminded me of the great value of what we can’t have in our real lives right now. This is utterly wonderful, and I implore everyone to pick it up.