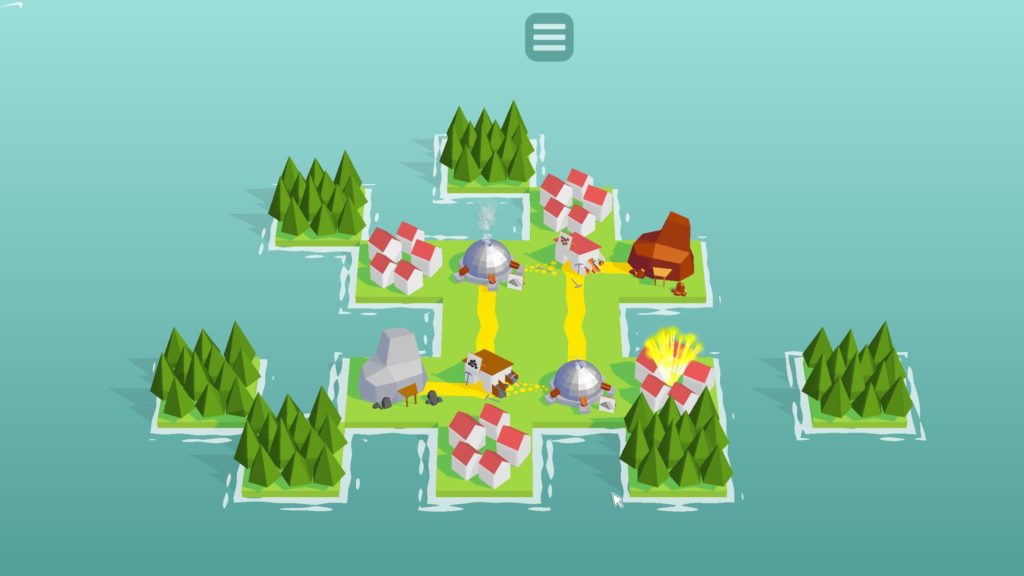 “Pelago” is a splendid word. Well, it would be if it weren’t either a brand of bicycle or a place in Florence. My best guess is there was at one point an intention to make a pun on the word “Archipelago”, but after realising they couldn’t get one to work, they accidentally picked up half of the chopped up word and it stuck. This insight aside, this is a game about solving puzzles by building economies. Sort of.

It’s all really rather cute. Little islands sport features like trees, mines, wheat fields, and so on, and there are villages that want for one or more of these products. So if some houses want wood, you click on the forest, and drag a drawn line across tiles until you’re at the village, and drop a little sawmill there. The village cheers. But wait! Another hamlet wants wood too, and for IMPORTANT REASONS, paths can’t cross! (Maybe people refuse to look where they’re going on these islands, like on the island that is Great Britain.) You can’t get a new line between those woods and this place now, and you’re going to have to rearrange. Explode that saw mill, delightfully to the boos of the townsfolk, and then try again.

That’s the puzzles at their most basic. Things quickly ramp up as you’re trying to not only move more product to more places, but also match different products together to meet in locations near villages. So if there’s coal and iron, and a village wants steel, you’re going to need to drag and drop a coal refinery, an iron… factory (?), and then from those drag and drop from both to meet outside the village dropping a steel mill. Look, it’s hard to explain, watch the video above.

There are then chain economies to build. Islands that have corn and want bread will need you to harvest the corn, mill it, and bake it with the aid of coal from a coal mine. And different towns will want different parts of that process.

The game is almost always about how to fit these never-crossing routes into the restrictive space, such that all villages’ needs are met, and the process of doing so is often very rewarding. It certainly helps that it’s all presented in lovely chunky cartoon graphics, and even more that the act of dragging-n-dropping feels instinctive and clear. Misplaced buildings are cleared with just a right-click (although for seemingly no reason there’s also the more convoluted method of dropping a bomb on them, but I wonder if that’ll be for mobile versions – it’s a game that would look lovely on an electronic telephone.)

What is in absolutely no sense clear are the appalling tutorial pop-ups, that for reasons no one will ever be able to justify, are written in “rhyming” “verse”. We gave Milkmaid Of The Galaxy a ticking off for this, because of how needlessly restrictive the format is. But Pelago is getting a kick right in the knee. Maybe both knees. Obfuscating the basic instructions behind drivel as abysmal as:

Is this more of the same?!?
No no!
This chapter may not have new goods.
Instead, they’re harder to obtain,
You know,
extracted from the Woods.

is utterly unforgivable. To punish them properly, here’s another one:

Calls for Goods are loud and clear
as the sea shore foams!
To satisfy them,
you must make ’em
right next to their Homes.

Every line of that was a war crime.

From now on it is against the law to write ANYTHING in your game in verse. ANYTHING.

Fortunately the rest of the game is a cute little puzzler, that has its difficulty ramp up slowly and calmly. And there are over 100 of them, so you’re getting a good deal.