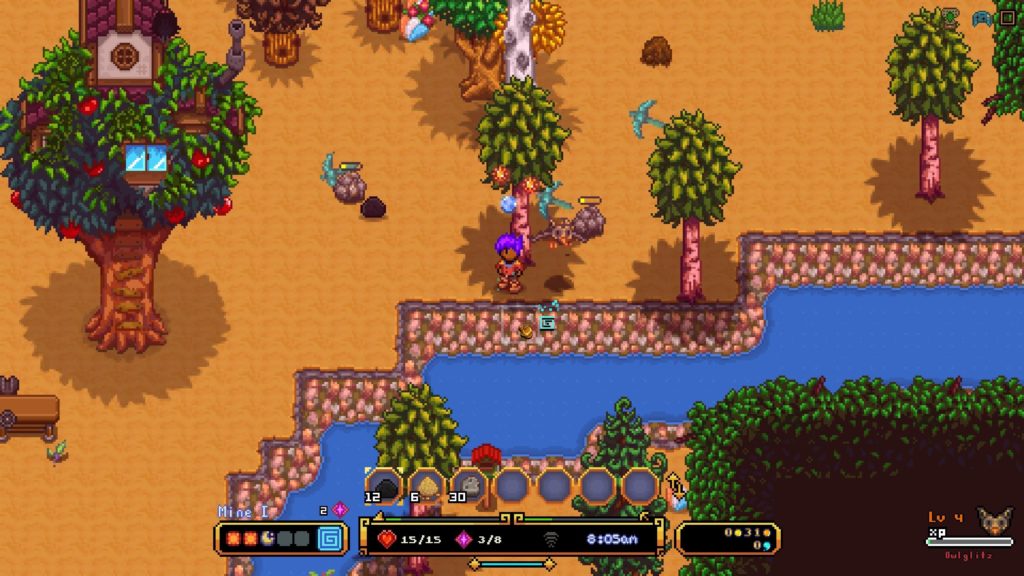 I absolutely had no intention to play Serin Fate for so long. It’s Early Access, so I thought I’d take a quick look, see whereabouts it’s at, and clock it for later. And then the entire day got eaten up.

This is an RPG that fits somewhere between Runescape and Harvest Moon, with a good dose of Pokemon thrown in. And as such, just isn’t my sort of thing. I’ve no desire to spend ages worrying about growing crops, or managing a menagerie, or negotiating relationships… And yet I’ve found myself absolutely hooked on every aspect of all of that. I’m collecting Chimera (the game’s Wuzzle-like animal companions), planting seeds in my curated soil along the edge of the pond, and chatting with the other witches in the nearby academy. Heck, I’m currently being infuriated by my inability to find a bird’s nest, which I only need to build a distraction for the sparrows that keep eating my crops before they grow. What has become of me?

Well, the first thing is I’ve become a witch. That’s the opening moment of Serin Fate – the titular fate stone has a habit of giving people new witch powers, and you’re its latest. Starting off in your rather lovely treehouse, you venture out into your own lands to chop down trees, mine ore, and begin the cascading compulsion of its crafting tree. But soon you’ll also venture outside, into the local town, and then eventually beyond into the enemy-filled forests that surround.

You can do all of this immediately, and it’s testament to how well this is already put together that I naturally progressed through this stages through interest rather than handholding. Resource gathering is done through spellcasting, with a nice system of building spells from five separate runes, more learned via exploration or store purchases. Crafting is very standard combinations of gathered items on a table, inevitably soon surrounded by the many chests you’ll build to contain the ridiculous number of gathered items. Then you’re fishing, exploring, fighting increasingly tough enemies, stumbling upon farms and secret goblin shops, the approachable world growing fast about you.

The one thing that’s not happening just yet is a story. That’s yet to be added to this alpha build, along with a fair few other elements and locations that are marked as currently unavailable. So it’s kudos to developers Vethergen that I barely missed it. I was so engrossed by its gentle systems, by the pleasure of winning over a new Chimera then playing with it in the pen I’d built, or venturing further into the forests in my harebrained pursuit of a damned bird’s nest, discovering tougher mobs and having to rush home to unload my heaving inventory. Or just finding the items I need to craft myself a nice new amulet, or as is my current focus, a lovely witch’s hat.

I’ve hit up against a couple of walls of things I can’t yet figure out. The nest, as I’ve said, but also the next stage in the optional tutorial quests, for which I’m supposed to mine for iron ore. I’ve not found any anywhere, and am waiting on hearing back from the busy Steam forums on how anyone else might have managed this.

This is very definitely Early Access, not least because it jokingly reminds you, with fierce guards refusing access to certain areas on account of my being an “alpha witch”. But it’s also impressively deep already, and undeniably engrossing. I’ve had an absolutely splendid time with it today, and absolutely will be carrying on, just as soon as I’ve an idea how to get the items I need.

Be warned, the alpha did wipe savegames in the most recent update. I’m very fortunate to have come in after that happened, but it seems reasonable to assume it could happen again. That’s the nature of the E-A beast. But if you fancy getting in on the ground floor of a really promising crafting/farming/animal collecting/fighting/shopping/exploring RPG, that is far more accessible than most of its ilk, this seems like a really good bet.