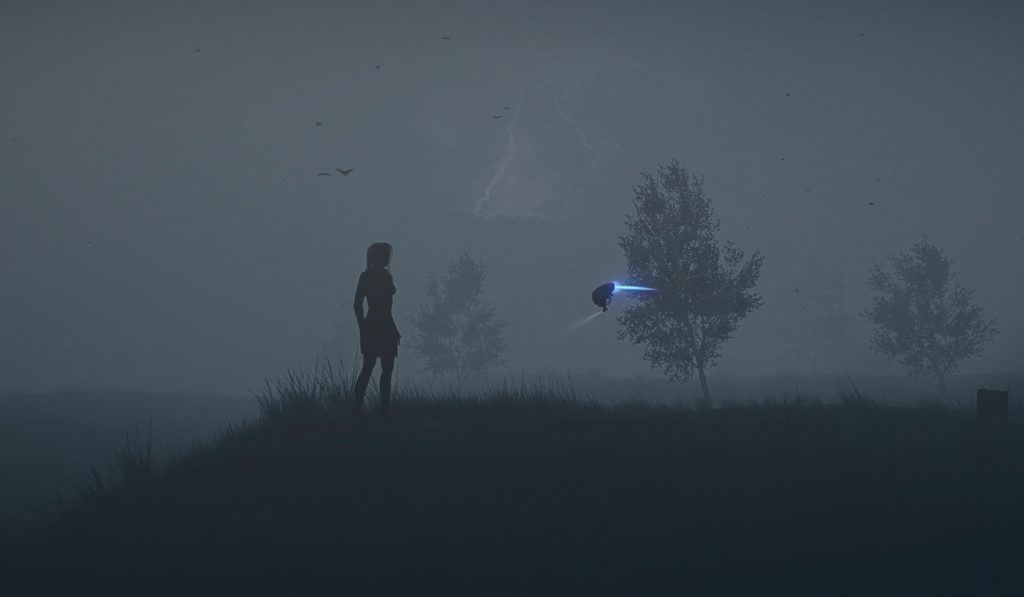 Well thank goodness for the excellent Buried Treasure Patreonites, and their splendid suggestions, or I might have missed one of my favourite games of 2019. (HT Slug Camargo!) 7th Sector is a top-notch side-scrolling puzzle-me-adventure: think Inside but with a brain.

Let’s quickly get this out of the way. A lot of silly people think Inside was good. But we all agree that it was not, it was rubbish. With that cleared up, we can celebrate a game that shows what really can be done with this format.

Some sort of ghost in the machine, your character begins as a fractured silhouette on a television screen, who then escapes the frame and emerges as a spark in a wire. For the first hefty section of the game, this is you: a spark, jumping from wire to wire, solving puzzles by controlling electronic items from door locks to remote controlled cars.

What’s immediately striking is how bloody marvellous it looks. Really superb art, and some AAA-like animations on the enemy robots that stalk in the backgrounds, or the little scenes that play out glimpsed through hazy windows. It manages that sinister dystopian atmosphere that Playdead do so well, inviting more comparisons, which I will now stop as it’s not very helpful.

The puzzles here are an interesting mix of very traditional (find a combination of buttons that gets a voltage to 220, arrange interlocking rotating rings to align) with situation specific (barging paint cans onto a large scale with an RC car, luring weighty crates into holes by smashing a robot into them to magnetise oneself, balancing crates on a floaty robot’s head to weight down buckets).

What’s also quite so impressive here is how 7th Sector never rests on its laurels. Each puzzle (bar the varying versions of the 220V puzzle) is never repeated, in a way that feels wonderfully refreshing. You manage to work out how to navigate a route, or how to balance what you assume is the first version of this challenge, and then it’s straight away on to its next idea. This lack of repetition really elevates this from other games of its ilk.

And it doesn’t just change up the puzzles. The spark is just for the first quarter of the game, with a sort of technological arc of progress exemplified by how you play. I won’t say more, because I enjoyed the surprises. The important part is: the game is ever-changing.

It is far from flawless. There are some real dud puzzles in there. Some are badly communicated, leaving you stumbling around trying to figure out exactly what it wants of you. Others are wonkily implemented, like one (rather dull) puzzle that requires making a series of notes to open a door, but for no reason whatsoever doesn’t work unless you’re standing in exactly the right spot in the room. Moments like that saw me resorting to YouTube, which is always a galling way to play a game.

It’s also buggy in a couple of places. I’ve had a couple of moments where I’ve had to reload (thankfully the checkpointing is mostly good) because it’s glitched. I’ve also had it crash.

I think it’s easier to judge this overly harshly for these issues, because it looks so damned professional. But as far as I can tell, this is primarily the work of one guy, Sergey Noskov, and that’s just ridiculous. (He previously made 35MM.) This is an astonishing piece of work considering.

There’s so much to admire here. The aesthetic is fantastic, influences drawn from City 17 and Bladerunner, a futuristic Russian/Chinese dystopia, with environmental storytelling so subtle that you’ll want to run up and down your street telling everyone to make sure it’s noticed. There’s one scene later in the game where you can see, in incredible detail, a protest taking place in a city square – it’s blurred in the background, glimpsed between gaps in buildings. It’s such a nice extra element. Then soon after I’m solving a puzzle a bit further on and hear a bang. There’s no reason to go back, I can just carry on at this point, but I went to have a look, and now the tiny glimpsed background protesters were all hunkered down, cowering, screaming, placards dropped, as police cruisers fly in. Oh my goodness!

Then there’s the audio, excellent oppressive sound and music, as well as recorded voices chattering in the background. And, as I’ve mentioned, it’s all so gosh-darned pretty.

So a few wonky puzzles are incredibly forgivable here, with everything else on offer. 7th Sector is one of the best games of 2019, and no one noticed it. Yet.