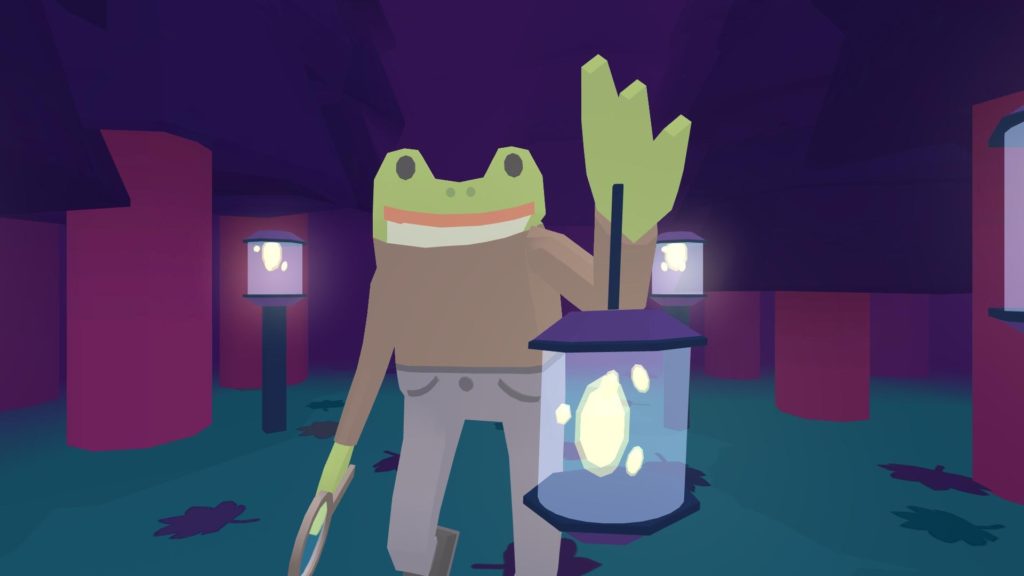 I really didn’t think I’d need to write this one. I thought that the adorable Frog Detective had enough fans on enough sites that its sequel would see a review with no issues at all. Wrong. Fortunately I have donned my cape, popped on my mask, and jumped majestically from the third step from the bottom to save the day.

Let me whisper to you a terrible, terrible secret about Frog Detective 1: The Haunted Island: (it isn’t a very good adventure game). SSSHHHH! Shhhhhhhhh! Don’t say it louder!

It was lovely, funny, cute, and oh my the dancing, but as a point-and-click adventure, which is what it looked like, you picked up the objects, gave them to the people who wanted the objects, and then it ended. As an experience, however, it was absolutely joyful! Breezy and cheerful and daft and with some absolutely gorgeous writing, there’s a really good reason why it won so many hearts.

Frog Detective 2: The Case Of The Invisible Wizard is cut from the very same cloth, closer to a visual novel than an adventure game, although with one Major New Advance: you’re given a notebook.

You know you’re off for some serious detectorising when you’ve got a notebook. You can mark suspects as suspicious! There’s a case to be solved here, and by jove you’re going to watch some notes get taken as you solve it.

In the original Frog Detective you were investigating a potential ghost situation on a small island. In Frog Detective 2 you’re visiting the small forest town of Warlock Woods, where a welcome parade for a new inhabitant has been wrecked before it even began. Who did this?! Why would someone do such a terrible thing?!

You see, a house that had been left empty for years had someone new move in. A wizard! A shy wizard, someone who didn’t like to come out, someone who is, we’re assured, invisible. The town’s response to this reclusiveness is, of course, to throw a parade, to make her the centre of attention. But the night before it was due to begin, it was trashed. Everything ruined. So The Detective visits the town (Lobster Cop was busy), to question all the locals and solve the crime.

It’s immediately as charming and silly as before. After a welcome nod to FD1’s greatest moment, acknowledging the factlessness of all books, straight away there are matter-of-fact lines like, “You’re not going to jail, jail isn’t real.” And I especially love Ralph the lion, who shouts to Frog Detective because he’s so little, confusing the aural needs of the small for those of the far away. (Which is 150x better than the Father Ted version of the joke, before anyone brings that up.)

It is also, well, whisper with me again… (sort of a bit too similar, but not quite as funny). Why am I so shy about saying this? Because it’s all so unutterably lovely, so bursting with happiness and charm, that it feels consummately dickish to pick faults.

I think perhaps it’s the repetition that causes the niggles to rise to the surface. In FD1 it was just all so happy that it didn’t really matter that your role was to ferry items between characters. In FD2 it’s all so happy, but your role is just to ferry items between characters again. And a little awkwardly, this time there’s not even the need to juggle a few at a time. You go around the characters in a circle, and then a second time handing them the thing they wanted. And then it ends with the ending you already guessed from the introduction.

I really liked it! I loved the writing, although it certainly feels less buoyant than last time. I loved the ending, which is gorgeous and exactly how life should be. And the art makes me want to smash through my monitor to cuddle everyone as much as before. This is a really sweet hour or so. And it’s important not to let the impending “but” take much away from that.

But, I did kind of hope for it to do something new. I’d hoped that it would perhaps have a little bit of thinking to do, especially with the notepad addition. (You can put stickers on your notepad, and I really liked that.) Perhaps most of all, I hoped for some dialogue choices in the conversations, which would have given a reason to play again, to find other silly/lovely lines. Doing the same thing twice has the effect of creating a feeling of being derivative, whether that’s fair or not. And this is slightly less silly, and it was the silliness I liked most about the first game.

This is £4, and that’s a perfect price for the adorable thing it is. It trailers a third game at the end, and I can’t wait to play that one too. I do rather strongly hope it’ll be a more involved game, if just in the dialogue, if not in adopting more of the genre it emulates.