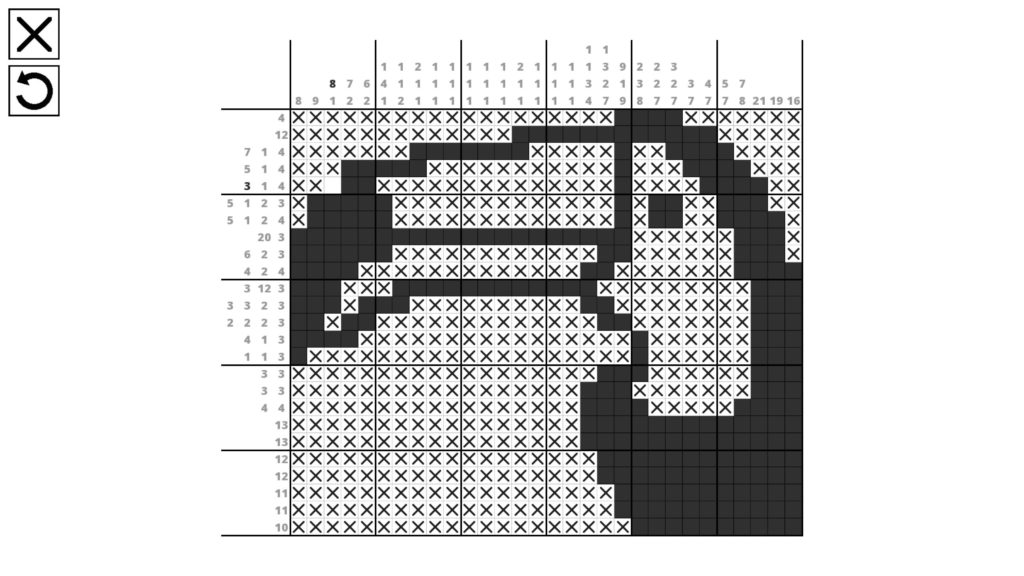 It was only yesterday that, elsewhere, I was arguing why I believe the Game Boy’s Mario Picross was one of the best picross games ever made. And the core of that was simplicity. Too often video game renditions of the logic puzzle try to do too much, at the cost of just letting you sit down and solve some nonograms. So it’s with this in mind that I recommend to you Picross For A Cause – a super minimalist delivery of the puzzles, but one that just works. And every penny of the proceeds is going to the NAACP Legal Defense Fund.

There is, of course, a platonic idea of a PC picross game, and that is Pictopix (my review). Measured against this, it’s tough for any griddler game to compete, and yes, here that’s the case too. However, two things: 1) If you’re me you’ve already finished Pictopix twice over, and have played most of the community puzzles, and now want some more. 2) Pictopix doesn’t have Colour Picross.

That’s the stand-out feature in this well put together, if very basic, picross game. I’d entirely forgotten they exist! I don’t think I’ve played any since the wondrous Japanese only Illust Logic DS + Colorful Logic on the Nintendo DS. Boy that was a puzzle game. RIP Hudson Soft. So hurrah that they’re here!

In Colour Picross, it’s the same principle but the numerical clues above and to the left of the grid are in different shades, indicating how many cells are to be shaded that colour. The tricksy part is, there doesn’t need to be an X between groups of differently coloured tiles, so it really does mix things up. And there are loads of them here!

The only significant issue here is the lack of a way to put “maybe” markers into the puzzles, which on the larger scale grids (and these get pleasingly big) can be enormously helpful for locating overlapping points. However, since the game also doesn’t penalise mistakes, nor even highlight them, you can improvise around using the Xs instead. Still, it’s a glaring absence.

There are a fair few hundred puzzles here, and each grouping also comes with a mosaic mega-picross, the sections unlocked by solving each other puzzle in the group. Which is a lot more effort than was necessary for this to be a good package, so a proper delight to see.

My only other semi-complaint is that this isn’t available on Itch, meaning it’s not possible to pay more than the very cheap £4 asking price. But of course you can always just go give the NAACP LDF some money any time you like. So yes, grab this – well worth it if you’re after some more picross to solve, and 100% of the proceeds go to an excellent and vital cause.