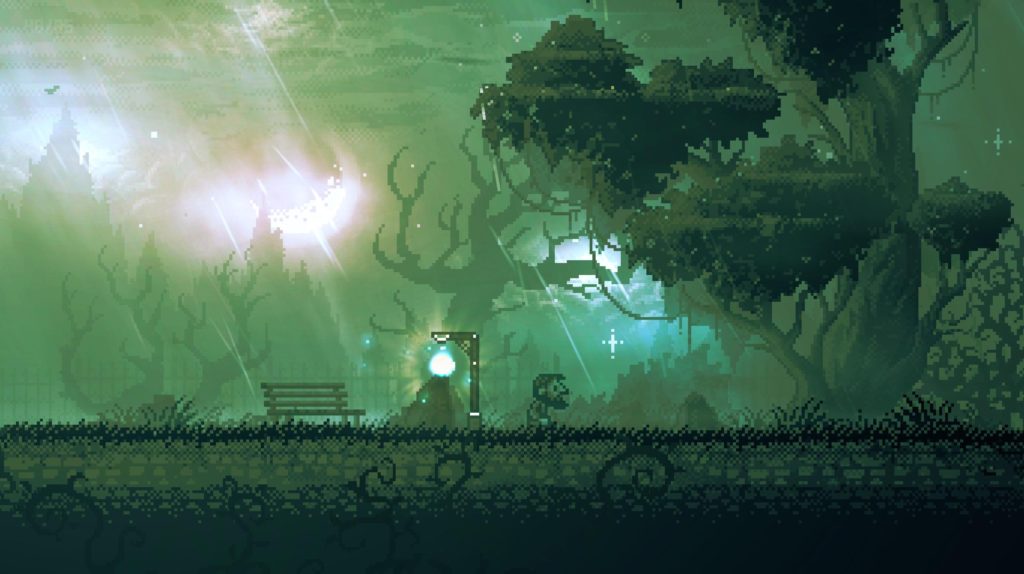 Inmost comes rather more cautiously recommended than your average Buried Treasure game. I feel as though I have as much to criticise about this game as I do to commend. But it’s also really quite astonishing, and certainly worthy of extensive discussion.

I mentioned recently my wish that indie games could find some other topics than grief to wallow in for a bit now. Inmost offers no respite from this morbid introspection that has spread across pixel-art games like a disease, being about as grief-focused and grief-driven a game as I can remember. From its funereal colour-scheme to its almost farcically miserable story, it’s fair to say you might want to steer well clear of this if you’re in anything short of a heel-clicking frenzy of rampant delight.

As a game, what you’ve got here are three concurrent pixel-platforming games, each intertwined, allegorical layer upon layer, each with their own focus. There’s the combat one, the exploring one, and the puzzling one. The latter forms the bulk of things, but it jumps about between the three with flittery abandon, designed to increasingly allow you to put together its story like a jigsaw puzzle with half the pieces missing. You’re left in no doubt that it’s about death, grief, sadness, loss, all those upbeat treats, but quite how and who and why remains enigmatic until the credits scroll and you search for online discussions to see what others think.

And as that game, it’s exceptionally well put together. I mean, quite astonishingly well in places. The largest section is a sort of Hollow-Knight-on-ketamine, although while by no means enemy-free, always combat-free. Laconically paced, it’s about expanding your access to a surprisingly small amount of real estate given just how long you’ll spend exploring it. You gain tools that allow access to newer areas, but in the tightest, most confined space I’ve seen a Metroid-me-do take place.

Elsewhere, the exploration sections are too easily spoiled but take place all in one house, while the combat-focused levels are more sprawling, spread out, asking you to whack your way through a collection of shadowy-goop enemies.

And oh my, it’s all so extraordinarily beautiful. We are spoilt for pretty pixel games these days, so it’s saying something to note how Inmost stands out from the crowd. Its Hollow Knight on a Game Boy Color aesthetic works wonderfully, and the animations are exquisite. Backgrounds are often breathtaking, and its sparing use of light – especially moonlight – had me gasp.

There are problems, however. The most surprising is bugs, given the number of testers the credits scrawled in front of me. There’s one level where dragging a plank in the “wrong” direction (you’ve no way of knowing what’s right at the time) creates a fail state it doesn’t acknowledge, and requires reloading the whole level. In another barriers that were supposed to disappear did not, again leaving me running back and forth wondering what I was missing, and again having to reload (although infuriatingly this time, to the level before, that happened to be excruciatingly slow).

Which leads to the another big issue: as you reach the latter stages of the game, it increasingly decides it’s going to play it for you. I ended up like a kid at a service station, waggling the joysticks unaware of the “INSERT COIN” flashing on the screen, as I realised I didn’t have any control at all. While the game has no issues with asking you to run a character from one end of a corridor to another, to trigger the next narrative burst, it latterly decides it doesn’t need you at all for this purpose, inching characters about on its own. I’m pretty sure the last fifteen minutes played out without my interacting at all.

However, my largest issue ended up being with the plot. And not just because I’m so damned weary of being told how to grieve by every other game I pick up. Inmost’s overall message is good: grief and love are inescapably intertwined. But its delivery goes far too far into a macabre absurdity, trying to throw in random death, childhood suicide, mental illness, possibly kidnapping, definitely murder… it’s frankly idiotic. It feels crass, and a welcome post-credits message suggesting those struggling seek professional help seems put there out of arse-covering rather than compassion.

I’ve worried before when criticising such tales that I might be undermining the real-life experiences of a creator, who is trying to process through their creation. I feel reasonably secure that no one has ever gone through a situation as ridiculous as what’s eventually depicted here. It’s bothered me.

Yes, like I said, it’s a problematic recommendation. You may not care a jot about such matters, and are fascinated to play a superbly put-together game with utterly gorgeous art. And its tale is told in such a piecemeal fashion that it’s an impenetrable muddle of metaphor for most of the time. There’s much about this I really appreciated. I just wanted to give you a heads up, too.