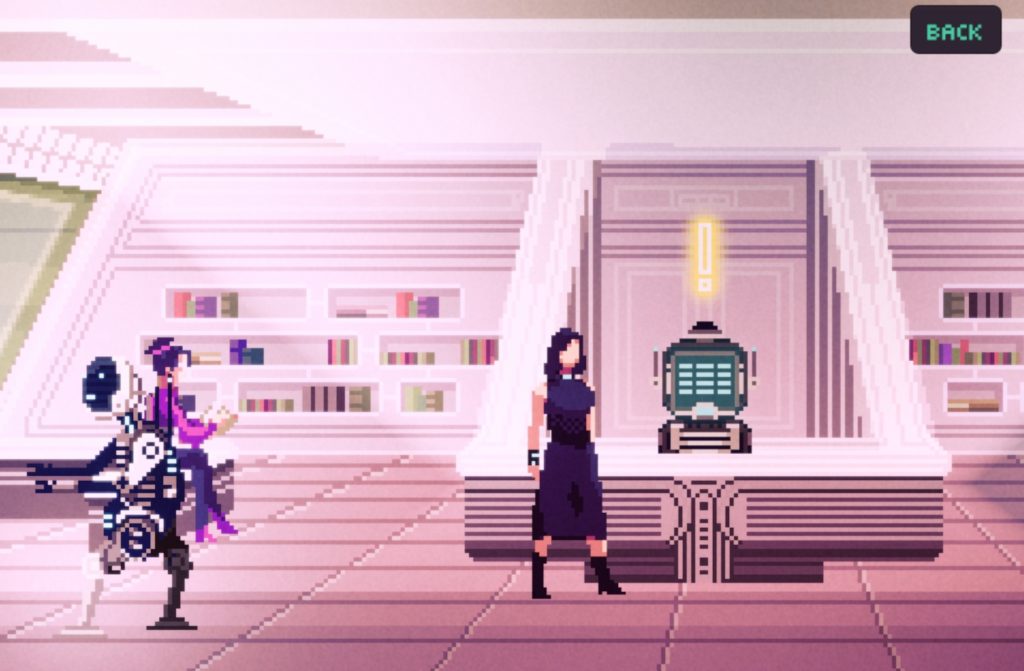 I’m really interesting in what Chinatown Detective Agency has to offer. Having played a very brief demo build, I’m pleased to see the potential to deliver it is there.

A favourite gaming feature of mine, and one far too infrequently used, is the need for external research. I first discovered the possibilities it presents when I played 2004’s In Memorium (Missing: Since January in the US), and it created a permanent click in my head. Chinatown Detective Agency (CDA) sees you playing former INTERPOL cop Amira Darma, running a PI business in Singapore, 2032.

Thus you have the beginnings for a cyberpunk-ish future-o-tech mystery game, with enough familiar cliche to through you right in without the need for clumsy exposition. Darma is, as you’d expect, not willing to return to the force, happier to work in her dingy offices, bribing public officials, and not being afraid to pull her gun when she needs to. Splendid.

This is all made immediately ingratiating by its presentation: some absolutely stunning pixel art. It looks beautiful, and nicely, mixes it up with sometimes intricately detailed vistas made of tiny dots, and sometimes big chunky almost McPixel-level close-ups.

Research appears in the single mission I’ve played when you attempt to locate a missing man. An informant is a touch opaque in his information, meaning you need to head to the game’s library to find out more. But to know which book to look up, you need to identify a quote. Clearly this is very early game stuff, and an incredibly simple puzzle, but it still feels great to head to Google, find out an answer, and then enter it into the game. I love that thrill of the edges of reality bleeding together.

There’s also a code to crack, which again at this point is very easy. And while I look forward to such things getting trickier, I also hope the game avoids going too far down the ARG rabbithole, where codes end up requiring having spent a stint working for GCHQ to be able to fathom.

Of course, having neat puzzles only gets you so far. Putting them in an engrossing story is the important feature, and there’s no way to know about that aspect yet. However, I really like the main character, and especially enjoy the setting. Things are grim, the world’s economy is collapsing, and Singapore’s government is on the brink. But thinks are still operational too. You can fly around the world, you can use public infrastructure – it’s pre-collapse, rather than post-, and that’s an important distinction.

Another feature I’ve not experienced, and am a little nervous about, is time. In the game the clock is always ticking (significantly faster than real-time), and you need to have completed tasks by certain dates. Book a plane ticket and you’ll need to be at the airport at the correct in-game time. I like the sound of a lot of that, but I also don’t enjoy the idea of failing because I took “too long” to solve a puzzle, or the phone rang. I do so desperately wish for games to just sloooooooooow down, stop having their clocks tick around so frantically. Getting this right will involve remembering to do a lot of first-timer play-testing, rather than making that oh-so-often repeated grim mistake: already knowing how to complete a section, and then timing the game around that.

Apparently you’ll also be able to build a team of informants, contacts, staff, and so on, to help keep your agency running smoothly. Although that’s the sort of feature you often see promised before a Kickstarter, and less mentioned after. We’ll see.

So yes, there’s a Kickstarter, that just launched today. It can also be wishlisted on Steam, and clicking that button does wonders for developers. I’m really interested to see how this develops. It’s already looking gorgeous, and I’m enamoured by the real-world elements. Definitely one to keep an eye on.