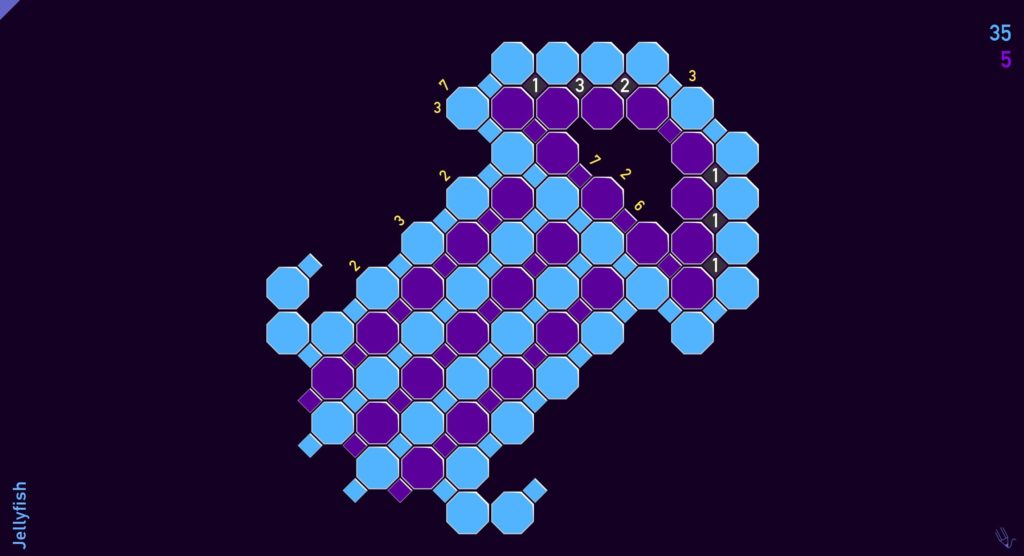 Tametsi is one of the best logic puzzle games you can buy on PC. It’s up there with Hexcells in my mind, albeit without the latter’s exquisite presentation. Its increasing complexity and perfect difficulty curve makes it one of the most compelling puzzles I’ve had the pleasure to play.

Now, I’m being a bit naughty here, because I’ve previously reviewed this on RPS, but having spent countless hours playing it over and over since, and now with its many, many bonus levels, I want to wax on about it some more. And hopefully bring it to the attention of those who haven’t seen it before. Because I love it. I want to kiss it.

(Also, in my head writing about it here justifies all the time I spend playing it instead of work I should be doing.)

I hate it when people compare puzzle games to Minesweeper. Minesweeper is NOT a puzzle game. It’s a guessing game. It’s a horrible, awful, terrible mess of design, in which many moves cannot be deduced but must rather be randomly guessed at, clicking and hoping, and thus is worth nothing. Destroy it. Burn it in an abandoned car park. Minesweeper is loathsome, and every single one of you is wrong to have ever liked it.

After that it bears far more in common with advance logic Fill-a-Pix crossed with picross. Yeah, see, you were all, “Oh, like Minesweeper, eh?” And now you’re all, “Help mummy.” Well that’s YOUR FAULT. Be better.

Each grid comes with a variation of its core set of rules. Numbered tiles indicate how many adjacent tiles contain bombs, while numbers external to the grid tell you how many are highlighted in that row or column. Then there are counts for how many of each colour tile contain bombs overall. These three pieces of information, or sometimes just two of them, are all you need to begin deducing the location of every bomb, letting you clear those you know definitely are not. Some of these will reveal new numbers, and thus you proceed (grrrr) Minesweeper-style to mark or clear them all.

There are 101 core puzzles, which will take a proper 40+ hours to finish. That’s a heck of a lot of game. Then those done, there are a further 60 super-tough bonus puzzles, which I’m working my way through now for the first time. And these are just soooooooo good.

There is never, ever a need to guess a next move. Because this is a proper puzzle game. But Tametsi demands more of the player than any other puzzle game I’ve played to find that next deductible play. There are so, so many techniques to learn, like counting possible placements of tiles along rows, cascading logic that ends in a point where you realise that one can only go here, or that it’s impossible to put two there.

I can’t pretend to have gone on this journey on my own. There’s a YouTuber called inn0centive who is a bloody genius, and has created videos explaining the logical path through every single puzzle. I’ve learned so much by watching him, and then have been able to apply that knowledge to solving the far tougher puzzles independently. And I always experience a moment of catharsis by noticing that the point where I’m completely stuck is where he too suddenly slows down and has to remember how he progressed. Especially when both of us have missed the same really obvious thing.

I now think to look at two or three rows simultaneously, combining their total number of mines, and then working out their minimum possible placement within the three lines of tiles, to find those that can never be filled no matter the correct placement of the rest. Delete those and another clue appears.

I have no idea how it’s vaguely possible to build puzzles this difficult, and leave such a perfect breadcrumb trail – it blows my mind, and I have so much respect for lone developer Tudwell of Grip Top Games.

So it’s agonising beyond measure to read that he’s not working on anything else. I wish I were a rich 16th century style patron, so I could just employ him to muse on puzzle games and compose new creations for me.

This is amazing. It’s outrageous that it’s only £2. IT’S ONLY £2!!! I desperately wish he would port it to Switch and mobile, because I want to be playing this on my sofa as well as at my PC. Maybe one day? Meantime, I’ll keep playing this on a loop until he makes something new.