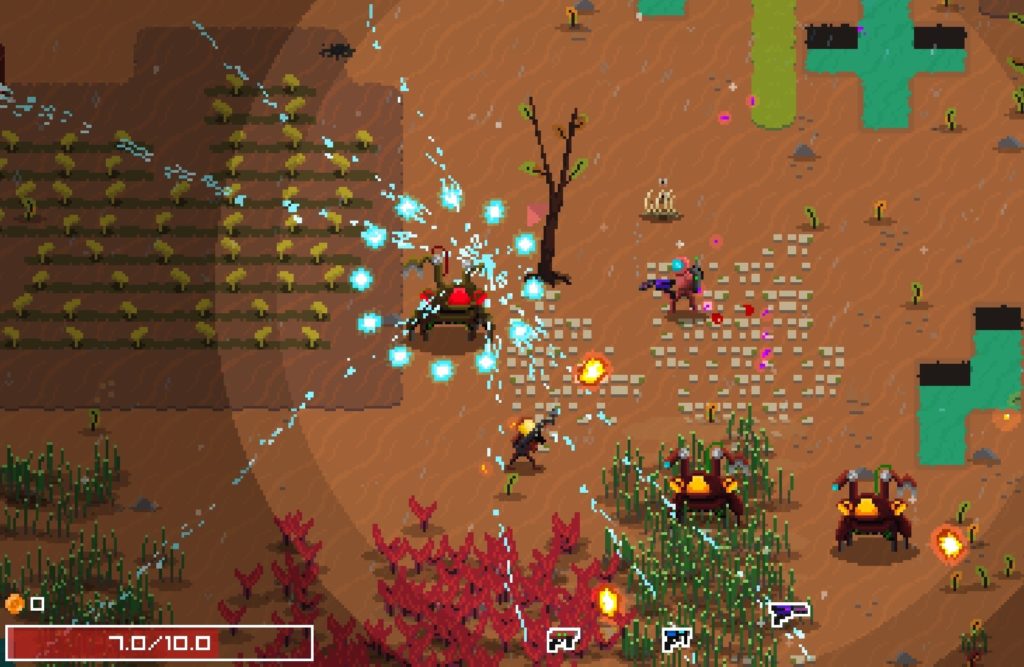 I can’t* get past the first boss fight in Planetary Dustoff, and I love it.

It’s absolutely ridiculous how much I’m enjoying playing the first two levels of this roguelite Gungeony shooter, despite dying in the third-level boss fight every single time. I don’t really feel like I’m going to be able to justify this to you either, because in many ways this is a very familiar format, done extremely well, but not with anything unique.

Well, hell, that might be wrong. It might become the most unique twin-stick shooter of all time after that first boss fight. It might be a pony decorating sim after that for all I know. I suspect there’s an awful lot more to it because of all the locked machines and features in the game’s hub, but after many hours playing those first two levels I’m no closer to finding out. And I’ve had a splendid time, thanks!

I’m reminding myself of when I was a kid, playing those demos that came on the front cover of ST Format (yeah, yeah, my dad bought an Atari, not an Amiga. You want to take that up with him? Well he’s dead, so don’t YOU look like the arsehole), over and over and over even though they were just the first couple of levels. Or worse, my unhealthy relationship with Chuckie Egg 2 on the Spectrum, where there too I was incapable of completing the third screen, and yet spent an improbable amount of time failing to do so.

I’m going to nail my colours to the mast: it’s more fun failing at Planetary Dustoff than it is at Chuckie Egg 2.

The notion behind your running around pixel-drawn maps and shooting at everything else is a quest to find an inhabitable planet for a group called the Space Faction. I mean, that’s a noble goal, but have they thought through about how it means they’ll need to change their name? That’s a lot of paperwork.

The result is something that falls somewhere between Enter The Gungeon and Nuclear Throne, by way of Ubermosh. It’s slick, splendidly animated, and even in those two levels I’ve used a huge array of different weapons using the game’s four ammunition types, as well as picked up a broad range of its dropped bonus (or “bonus”) items.

Learning your way around such items is a big part of the early curve. Some are excellent help, improving firing speed, adding shields, giving you a chance for temporary invulnerability after rolling, that sort of thing. Others are complete bastards, looking like they might be lovely, and then making you use up more ammo when reloading, or have it now hurt to use coins! (That one was called the “Credit Card”. I should have guessed.) These effects are consistent to the items, so you can learn your way around this, which is a feat of both time and memory. Pizza slice good, donut bad.

Not all my death was my fault. The game is weirdly glitchy about containing the mouse when in windowed mode, the cursor randomly slipping over and clicking outside, which in turn adds another bug that has your character run inexorably in one direction until you alt-tab in and out. Obviously running fullscreen fixes this, but it’s a shame. However, once it was fullscreen, I ran out of excuses.

*AND THEN I BLOODY DID IT!

I beat it! I beat the very, very beginning of the game! I AM A GOD!

And lasted about 30 seconds.

But did I stop? No I did not. I immediately started a new game, and this time got the flamethrower for the first time! And then picked up an item called “The Heart Banner”, which gave all the enemies +1 health. And then died.

And then I DID IT AGAIN!

I realise I’m labouring the point here, but this is what I love about these roguelite twin-stick shooters so, so much when they’re done right. There’s a learning curve, and it’s fun to learn! I get better at them. I learn their systems, I improve my skills, and I progress. But rather than feeling like a grind to do so, I enjoy the act of failure too.

This was in Early Access for most of this year, and has now released as a finished version. Only on PC for now, although I think this would really suit the Switch. I really recommend it, even if you’re as terrible at it as I am.