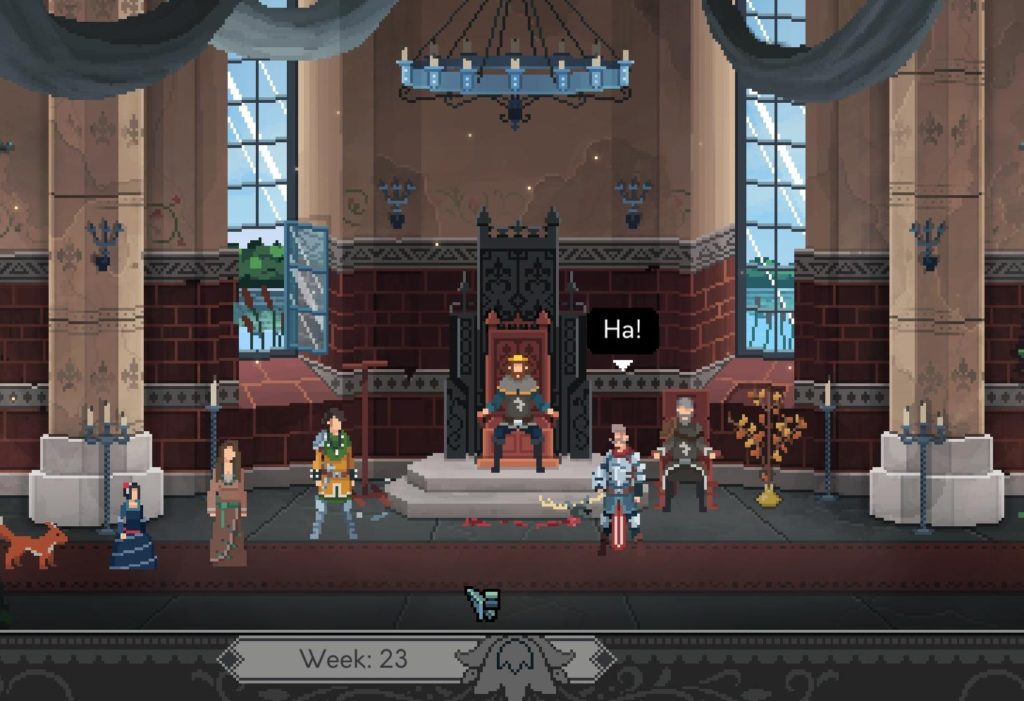 I understand why, too. Honestly, I avoided the game on release because of what I was expecting. I had somehow assumed it was going to be a game of managing a kingdom’s resources as random events playing out in a rogue-lite fashion. A game of fiddly numbers and long-term implications of inept decisions. The sort of game that seems to be astonishingly popular at the moment, but deeply off-putting to me. Except, I was utterly delighted to discover this is a narrative-led game, during which your decisions and resource choices affect how you are told its pre-written tale.

Which is, of course, what I think a lot of other people found wrong about it. In this game in which you must make hundreds of tiny decisions on a week-by-week basis as the King of your land, you ultimately don’t change the major beats of its story. But goodness me, you enormously affect how that tale is told.

You are King Eryk, father of three daughters, married to your faithful Queen, in a setting that could fit very easily into a minor backstory region of Game Of Thrones. Which may feel like a lazy reference point, but it’s unquestionably a huge influence on the overall themes, albeit without the all-pervading grimness and gratuitous smut. War is coming, it’s weeks away, and you have a kingdom of villages and villagers to take care of with very limited supplies and money.

Each day (it’s actually broken down into weeks, but works like a day, and well, you get used to it) you have a line of people who want an audience with your majesty, whether they’re visiting noblepersons after some sort of diplomatic allegiance, local peasants asking for help with their parochial problems, or members of your own family trying to get your attention for more personal matters. Basically everyone either wants money, resources, or the time of your key staff, and you have to make difficult decisions about who you’ll look after, and who you’ll essentially abandon due to lack of supply.

The latter is largely because of the bigger picture, as you build up toward the inevitable invasion of enemy forces, needing to secure the loyalty of surrounding leaders to stand by you in battle, as well as have enough money to pay your staff, and buy the defences you’ll need. Which is all the stuff that put me off, making me think this was more of a management game than anything else. And it really isn’t! First and foremost, this is a narrative adventure.

It looks and plays much more like a point-and-clicker than anything else. And a beautifully drawn one at that. The writing is fabulous throughout, and the depth of relationship that’s established between ol’ Kingy and his family is incredible for a game that can be completed in four or five hours. (Completed the first time, that is, because you’ll definitely want to return to it to see how else things can play out.) I really feel like I got to know each daughter as real individuals, even if part of that was smart use of familiar tropes.

Sadly this wasn’t so much the case with his wife. She’s definitely the most underwritten character in the game, and rather disappointingly has no agency whatsoever – her most frequent line from her bedroom-bound life is, “I’ll just stay in here.”

There are some other aspects that feel a little unfinished. The map, from which you send out your agents to nearby villages, is clumsy and confusing, popping up windows full of “??” rather than useful information, and village names vanish once they’re visited making it very confusing to keep track of things. The entire map really should have been scrapped and started over. I’d also have liked it if it could just not offer a way to start conversations with characters when all you can say is “Goodbye”. Or better yet, write more incidental chat for such occasions.

But overall, this was far from the rogueish resource management game I’d feared, and a far more rounded story adventure. Which made it exactly what I wanted, while I completely understand how the reverse happened for so many others.

Disclaimer: While I’ve never worked with No More Robots, we have discussed ideas in the past.