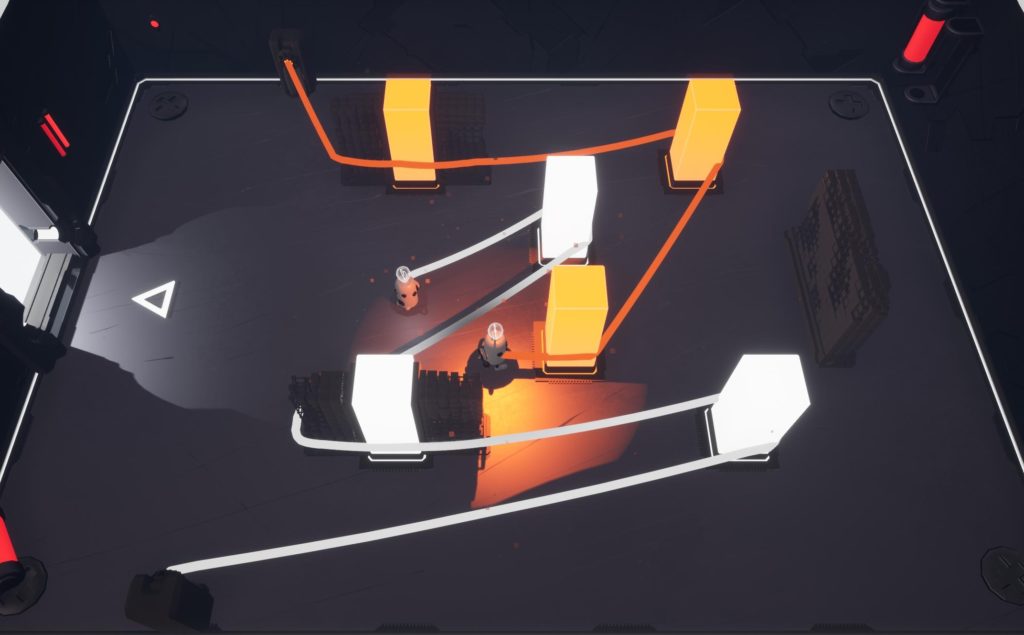 Are you cleverer than me? Then I strongly recommend puzzle-me-adventure Filament, a really lovely game about exploring an all-but-abandoned space station.

After arriving at the ship, your nameless character hears the voice of a surviving crew member, delighted to find someone has come to rescue her, but cynical that you’ll be able to do so. A well-placed cynicism as it turns out, with me at the controls. But perhaps you’ll do a better job with its collection of puzzles, used to unlock both new sections of the ship, and computers containing information about life aboard the ship before some events went down.

The exploration is done in third-person, jogging about a very large network of corridors and rooms, all delightfully well detailed and shining with environmental storytelling. Then when you find a puzzle node, you insert your arm, presumably containing some sort of computer device, such that you can interact with the puzzles that unlock the node.

These are a broad set of variants on a simple idea: you move a little robot dude around a square room, who trails out behind him a conducting wire. The wire must touch all of the vertical columns in the room the correct number of times before the exit door will open, and then he has to be able to reach that without having tangled himself up. Think pulling string around a board with carefully arranged nails – you can wrap around any nail as much as you want (unless it’s a specific type with limitations on that sort of thing), but you can’t cross over string you’ve already laid.

Then of course it keeps spinning ideas off of that. Some puzzles have multiple robots of different colours, who must light the corresponding columns, but still allow one of them to reach the exit. There are intricate mazes were walls and barriers mean you must fathom a precise path that allows all the columns to be lit despite the obstructions. There are columns that when both lit create a connection that opens a door in a barrier. There are columns that must be touched by the wire twice, and others that can only be touched once… You get the idea. Same core idea, different rules in each mini collection.

And gosh I love it. I love the presentation, I adore the music that is soothing and left playing as I write this, I enjoy the voice acting, the writing in the very many messages hidden on the computers, and the super-subtle environmental clues left to notice. I love it right up until I can’t love it any more, as they puzzles get too tough for me, and the game has no in-built hint system to accommodate that.

This is of course about personal ability. There are puzzle games at which I’d venture myself something close to expert. I think I could see off a fair number of opponents when it comes to speeding through many a logic puzzle. But these more experimental challenges, which require trying out multiple ideas to find a route that works – it flummoxes me. But there’s a strong chance it won’t flummox you.

It frustrates me enormously this isn’t the sort of puzzle that clicks for me, because I really love how well crafted this game is, and how the tale is told, and I really want to carry on! Which I suppose I can do like a big ol’ cheaty bad man when walkthrough videos begin to appear. I do really wish it could offer some sort of hint system, perhaps reasonably limited, so I could get nudged in the right direction.

It’s worth noting there’s a lot of freedom to approach puzzles in different orders, and when you give up on one you can walk away and try some elsewhere. It’s a little bit Witness in this respect, but I’d hate for you to accidentally cross-pollinate any sense of that game’s insufferable smugness – there’s none of that here.

If you’ve got the chops, grab hold of this. And there’s a good way to find out, since the game has a demo. I shall sadly bow out, which I realise doesn’t make this the most helpful of reviews. But you know, sometimes things are hard.