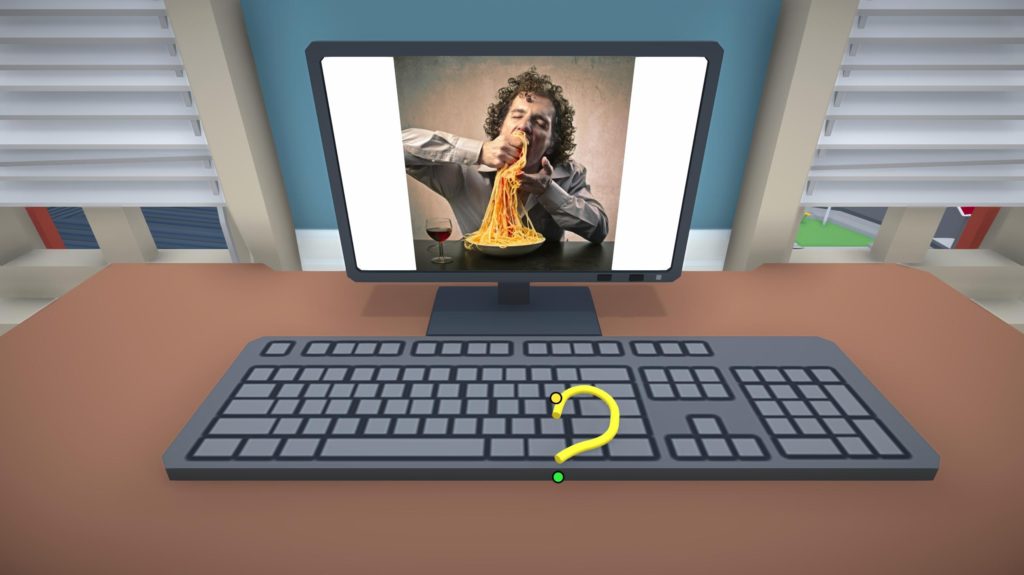 Freddy Spaghetti isn’t just an episode of Parks & Rec, it’s also a game that has the confidence – nay, the courage – to discuss the moral implications of giving sentience to pasta. I know there are those who would prefer people’s personal politics stay out of their games, but I am so relieved that at last a developer has had the tenacity to cover this subject.

The tale begins when a scientist, seeking a breakthrough with his consciousness-giving machine, awakes from a dream knowing the correct subject is a strand of spaghetti. He rushes to his kitchen, then personal laboratory, and soon after Freddy is born.

Lovely Freddy, living in this family home, playing football in the yard, helping out around the lab. Until one fateful day when Freddy, just out of curiosity, decides to Google what spaghetti is for.

It’s safe to say he’s upset. Very upset. Upset enough to reprogram his creator’s device to increase his size, such that he can go on a rampage through the city, and indeed through time itself.

Yes, this is an enormously silly game.

Control is on either mouse button, with the position of the cursor on screen determining direction. Each button moves one end of the strand of spaghetti, such that you’re sort of leap-flopping him about the world, in the erratic way you might expect a cooked length of pasta to move. And in this is everything that’s right and everything that’s wrong with this idiocy.

The game is at its best when it’s asking you to do silly specific actions, like shove a box to a particular spot in a room, or furiously crash into cars to set off all their alarms. Here the flappy physics and wayward movement make sense, as you struggle against it to complete your tasks. It’s not quite Octodad, but it’s a muddly movement that makes for fun scenarios. The game is at its worst when it asks for precision movement, often at speed. It’s safe to say I’ve gotten a little frustrated here and there.

It’s hard to stay mad though. Even after the utterly dreadful floating platform level set in the future, where microscopic mistakes send you back to the beginning of far too many jumps. Indeed, there are far too many levels with repetitive tasks that go on far, far too long. Look, I’m not entirely sure that Freddy Spaghetti is a particularly good game. But have I mentioned that you control a cooked piece of spaghetti as it confronts an existential crisis?

It’s funny when it’s not being annoying, and fun when it’s not being fiddly. And with 50 of these stupid levels for just £4, it’s hard to make a big fuss. Because, and I just want to be sure that I’ve conveyed this information, it’s the metaphysical dilemmas of pasta.