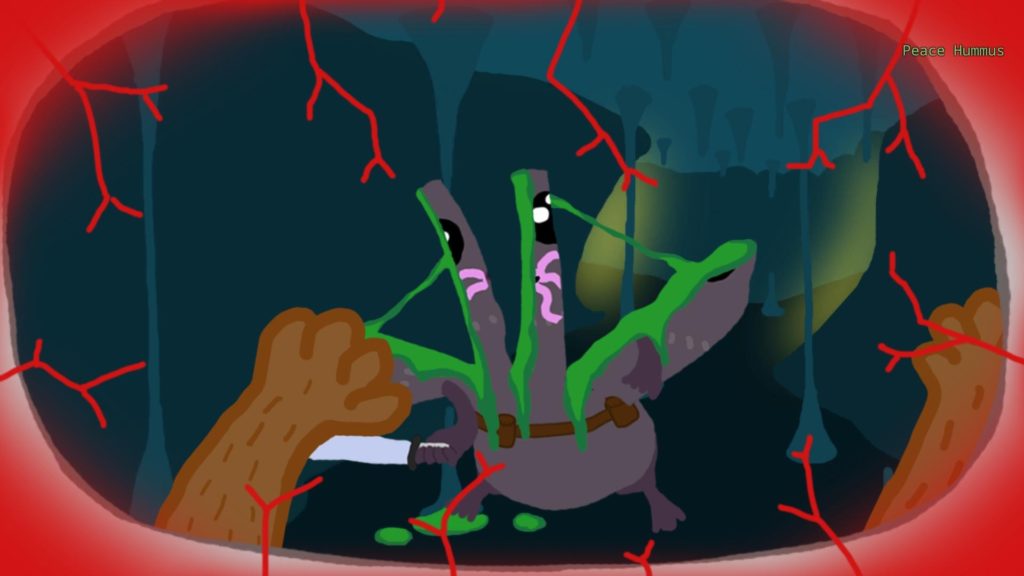 The most ludicrous words I’ve read in many a while are those in the email from the developer of Space Bear, Damon Smith, where he wrote, “I suspect Space Bear isn’t good enough to reach the heights of Buried Treasure.” Damon. Damon! Space Bear is absolutely bloody brilliant, and I adore it. It is the reason Buried Treasure exists.

Space Bear is, as it describes itself, a ‘”typing” “adventure” “game”‘. It’s about a space bear! He’s in space, and he’s in trouble. There’s a black hole drawing in his shop, evil void mole monsters are about, and his only hope is communicating via typing with his sentient spacesuit, Taffy. But bears are impatient, and Taffy is a very complex AI capable of predicting Space Bear’s desires, so all you need is type in the first letter from the choices of replies, then mash your paws on your keyboard to “type” the rest. YES.

Now, of course, all that completely excellent silliness would be for naught if it weren’t backed up with good writing. So it’s a relief to report that it’s a laugh-out-loud escapade of gloriously funny nonsense. Meta-looping daftness, flashbacks that make no linear sense, and – well “puns” is a strong word – “puns” like “Prbear-sident”.

Fighting against the narrative by deliberately making bad choices only leads to far funnier situations, like my refusal to go see the Prbear-sident by hibernating, then taking hallucinogenic drugs, turning my arms into a fish and a lobster claw.

“Spacesuit have my paws always been sea denizens?”

I ask this by typing ‘S’ and then just mashing letters to finish the sentence. It’s very satisfying.

One of my favourite scenes is when the Prbear-sident (this doesn’t stop being funny to me) is explaining the severity of your mission, and instead of following on you can start thinking different thoughts. Like whether ants use glue to make ships in bottles, or if ducks have food allergies. Then keep asking the poor Bearmander In Chief to repeat himself.

“(There are probably ducks who are gluten free just to be trendy.)”

And best, this is all a multi-part sidetrack that you don’t have to go down if you give a slightly more sensible response in the first place. All said while my aquatic paws frantically wave about typing on an imaginary keyboard.

After four loops round he thinks, “OK I should really pay attention this time, the plot demands it.

Oh man I’ve laughed so damn hard, so many times. The line, which will wonderfully make no sense out of context, “Ahem I believe I had a clean butt,” made me laugh, clap, and laugh some more.

And yet, as daft as it absolutely is, there’s a good deal of work gone into this! OK, perhaps not in terms of the art (which I love), but silly responses you give at one point carry on through in terms of available dialogue choices for the rest of the game. My Space Bear is avenging his dead daughter, but yours could be doing it for his alive daughter, dead or alive son, or for neither.

At a certain point, I accidentally became properly engrossed in the plot, and found myself unable to choose the silliest replies because I didn’t want to jeopardise things! But then fortunately I got control of my senses, and recognising what the game keeps telling me in deeply sarcastic tones, it’s all heading the same direction anyway.

Yet the dialogue choices have enough of an impact that I wanted to start over the moment I finished. Which I did. And then laughed at a different set of jokes.

The first comparison that came into my mind as I played was Kyle Is Famous. It has a very similar vibe, and is similarly funny. But it’s worth making clear that where Kyle’s choices send it spiralling off down myriad narrative pathways, Space Bear’s very definitely do not. Even though some choices change the nature of some later, this is very definitely a single track. Enough that the game mocks itself for it throughout.

But crikey, I loved this. It’s short, maybe half an hour? But it’s so, so funny. Especially if you like jokes with the word “butt” in them. There are lots of those. Yet again I find myself lamenting that this is free! I’d love to have paid a couple of quid for this! There’s not even an Itch where one can do so. So my conclusion is that Damon Smith is double-silly, and everyone should get hold of this because it’s hilarious, and you’re a bear who can moon people.