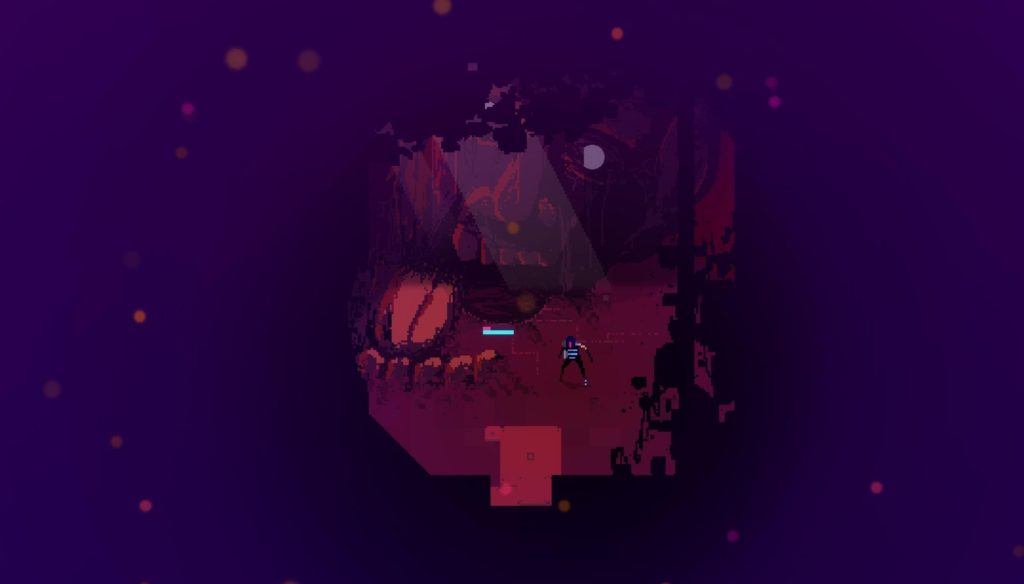 To give you an idea, if the Resolutiion demo had been priced at a fiver and released as a complete game, I’d be imploring you to buy this. Here you have a solid couple of hours of top-notch arcade action, with three decent bossfights punctuating its peculiar, unhinged world.

As it is, this is a free demo for a forthcoming larger game, that everyone must immediately wishlist until an algorithm snaps somewhere in Valve HQ.

Let’s get it out the way: yes, the art is absolutely, undeniably, utterly inspired by Hyper Light Drifter. Or Songbringer. Or both. And respond to that with a big fat “HOORAY!”, because if only more games looked this beautiful. Where the aforementioned aim for a more bucolic feel, Resolutiion pitches for somewhere far more abnormal, post-apocalyptic tone, but if the apocalypse made everything go really weird.

Very little is explained at the start, including who you are, and why everyone in the large building you’re in is talking like a malfunctioning robot. According to the game’s description, you’re an “old killer”, although clearly whatever sets that up isn’t part of the game yet. But beyond that, there’s a great deal of pleasure in trying to fathom what this world is, why it’s like this, and – you know – why there’s a 50 metre high deadly kitten burrowing through the surrounding desert.

The whole world feels wrong, unsettling, helped by an excellent soundtrack and even better sound effects. Nothing quite makes sense, your interactions with everyone are eloquent but barely intelligible, and accidentally hit a purple bush with your weapon and you’ll temporarily be thrown into a dizzying drug-fuelled confusion.

Combat is tough, fast, and requiring calculation. During the demo you’ll pick up three weapons on top of your original melee slash, each very, very different to use. What needs what is yours to fathom, and their introduction suggests some Metroidy vibes might be to come in the larger game. During this lengthy demo, there is an impressively large three-stage puzzle that requires thinking about this, returning to previously inaccessible areas, etc. It all works so very well.

I especially love the spindly scribbly appearance of the main character, and the animation for the swift, satisfying movements. There’s also a dash that’s more interesting than others. Instead of being a split-second move, it’s instead a metered action, letting you rush at incredible speeds until your stamina is exhausted. This goes very fast when dashing, but allows for more interesting escapes – especially in boss fights – than just zip-zip-zipping, while of course the latter is possible too.

Stamina also doubles up for ammo, peculiarly, but effectively. It’s basically a universal resource, excepting health, and managing it is a big part of the action. If you dash about too much, you won’t have any bullets to fire at the end of it. Empty your ammo at a baddie and you’re slower to get away. So it’s about finding that balance in any particular encounter.

Boss fights are surprisingly fair! I worried I wouldn’t get past the second one for a bit, but walked away and came back, and worked out my way through it. Others will finish it first time without losing health and think me a fool. But for those who struggle, know that even I could do it. There’s comfort.

I just love this. Sure, it’ll remind you of Hyper Light Drifter and Songbringer, but think about it: it’s another game like those amazing games you loved! Except weirder, and with far better writing. And giant killer desert kittens.

The demo is free, and both good and big enough that I’d have been delighted to have paid. And it’s available to wishlist right now. You should do that.