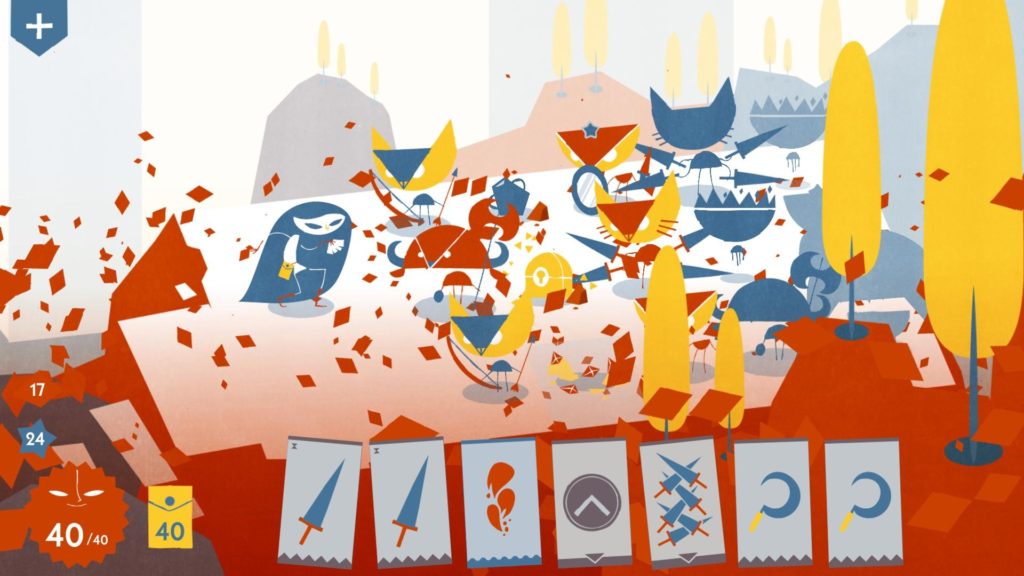 I really never thought I would ever be someone who played deckbuilding games. I never managed to get into Slay The Spire or Darkest Dungeon, and figured it wasn’t a genre I’d ever get to grips with. And then I stumbled on Meteorfall. It was love at first sight. It clicked. I got it. I got really good at it! I played it until I was on game+++ modes for every character, in a way I never play games! I’m having very similar feelings about Iris And The Giant.

I’m completely bewildered by the lack of attention this has received, considering the press’s usual adoration of the genre. But then Meteorfall suffered similarly. Perhaps it’s not cooooool enough. I’ve no idea. But let’s pay attention to it right now.

In Iris, you are a young girl who is – deep sigh – seemingly suffering from depression. Oh boy, I think I know why it’s getting ignored now. Men, please, stop making teenage girls with depression the central conceit of your games: it’s never, ever a sensitive way to handle a deeply complicated topic, and it always feels manipulative. Thankfully, for the most part this is ignorable with judicious use of the “skip” button, and a focus on playing the excellent game that dominates. Iris comes into a series of monsters/demons, politely queuing in lanes to attack her.

By playing attacking and defensive cards, you attempt to stave off the flow of baddies, until the travelator lanes bring the steps up to the next level near you. Managing the hoards, trying to keep control of your deck, and choosing which of the flurry of one-run-only upgrades you’re going to pick, are all the reason to play. It’s one of those games where the process of understanding its mechanics is a big part of the reason to sit down with it, and as such it’d be crappy for me to over-explain it.

There’s so much going on here, with various in-game currencies to gather as you progress unlocking choices of new bonuses and new cards to add to your pack, as well as gaining points that gain you randomly rolled bonuses applied to your next try, and then Memories to add from a selection of new permanent skills. Then on top of that, Iris can pick up Imaginary Friends on her runs, who are then unlocked by completing a challenge on another attempt. Reach floor 8 without any unlocked skills, or reach floor 13 without using Confidence cards. Do that and they become someone you can take with you to add their own bonus ability.

It sounds like a lot, but they’re introduced well, and unlocked as you progress. And more than anything, they make not clicking “New Game” at the end of any run incredibly difficult. I’ve played this far more times in a row than I’ve intended to, too intrigued by the next-run-only bonuses and how they’ll help.

It certainly helps that it’s just so damned pretty. The 2D cartoon art is so brilliantly done, with excellent animation. Which makes the damned story all the more annoying. It infiltrates the game via the Memories, which are items that trigger a mawkish bathetic moment from Iris’s childhood, in which she’s… a bit distant from her parents, or a girl is mean to her at school. It reeks of “what a grown up man thinks being a teenage girl is like”, which is a bloody epidemic in gaming of late. COUGH-GRIS-COUGH. Stop it! STOP IT STOP IT STOP IT.

But it really is mostly ignorable, I promise. It’s 99% biffing demons with cards, which is what we all came for. And in this respect, I’m really into it, really enjoying grappling with its systems. I think it’s perhaps expensive at £14, considering Meteorfall is less than £4. But it’s getting very positive reviews on Steam, so clearly selling, and good for him if it is.