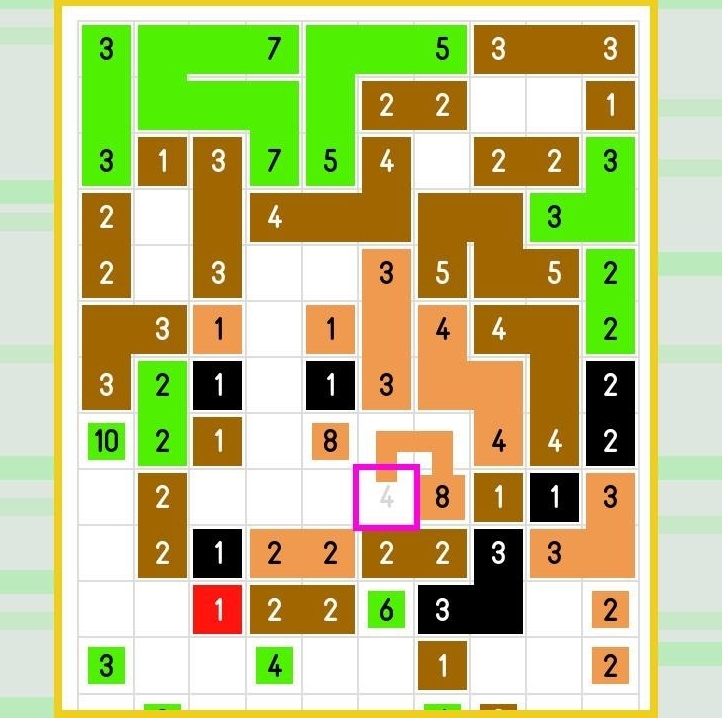 I just did my taxes. There’s nothing worse in the entire universe than doing taxes. I’d rather sever limbs with a rusty spanner. During them, as I worked out my expenses, I noticed that I spent rather a lot of money on one particular game: Conceptis’s Fill-a-Pix. Well, mobile payments, so if not rather a lot, rather a lot of times. Twelve, in fact. Twelve separate entries for one game. (Totalling £27.54 – bloody hell.) I began to feel a bit self-conscious as I typed it in each time. I began to wonder if my accountant might think it’s some sort of incredibly low-key tax scam.

This proved a coincidence, since I’d spent my dwindling bedtime hour of last night playing through the demo levels in the recently released Switch game Link-a-Pix, a sister game from the same developer. It’s fair to say I’m quite the dedicated fan of Conceptis’s puzzle games. And since absolutely no one anywhere ever reviews them, it occurs to me I really ought to talk about them here.

So who are Conceptis? They’re a puzzle publisher that’s been around online since 2002, putting up thousands upon thousands of some of the best logic puzzle games, to play online or print out like some sort of caveman. (Hello, I am some sort of caveman.) They also produce puzzles for everyone else, and the chances are you’ve put pencil to one of them at some time or another, perhaps in a newspaper or magazine. (I subscribe to Puzzler’s Beyond Sudoku (because of course I do) and they provide puzzles there too.) They say they create over 25,000 new puzzles every year. I think I solve perhaps 23,000 of them.

Their tendrils spread further, onto 3DS, PS Vita, PS4 and Switch, via a partnership with a UK developer, Lightwood Games, and it is they who just brought Link-a-Pix to the Switch this January. Joining Pic-a-Pix and Block-a-Pix, it offers Conceptis’s puzzles in a format that takes advantage of both the button and touchscreen controls, under the mantle of “Deluxe”.

(I should also add they released Fill-a-Pix: Phil’s Epic Adventure on Switch and 3DS previously, but there’s something about the presentation that really puts me off.)

But I should probably get around to explaining what Link-a-Pix is. Oh describing logic puzzles is never fun. It’s always better to just have someone try one. So, er, go try one! There are a bunch of free online ones right here. And there’s a free demo on Switch that’ll give you four puzzles to play, too. But in the meantime, you have grids of varying sizes, some of the tiles numbered. The goal is to link the numbered tiles to one another, via a chain of tiles equalling that number. So 2 will always be immediately next to its accompanying 2. 3s might be a tile apart, or diagonally adjacent. 12s can snake around all over the shop. It’s about working out the only possible way all of them can link together, and thus creating a picture.

They come in black-and-white, and colour, the latter the easier of the two since you need to match colours of numbers too, making for fewer variations. And that’s it. The larger the grids, the tougher the challenge, and the longer they take to finish. And the more rewarding they are as a result.

There are 240 brand new puzzles straight away, and there are already another 120 puzzles as DLC that were previously available on the 3DS version. Which is an awful lot for your £7 (or about £11 with the DLC). It’s exceptionally good value compared to the idiotic amounts I’ve spent on the mobile apps in more piecemeal chunks.

I’d say they’re still more comfortable to play on a phone than on Switch, simply because Nintendo’s touchscreen isn’t the greatest. However, I prefer to play this with the buttons now that’s a possibility, and it lets you switch between the two on the fly. My only real complaint is that I wish it would either let me zoom out further, or have the screen scroll more quickly since I can’t.

I would dearly love to see Cross-a-Pix getting the Switch treatment next. I don’t get on with Block-a-Pix as a puzzle, and Pic-a-Pix is really picross, and that’s already utterly perfectly covered on Switch by the sublime Picross S series. Cross-a-Pix, or Campixu as it is more sensibly called, is my absolute favourite of all these puzzle types, and would keep me happy for a squillion hours.

Link-a-Pix is a solid puzzle though, and this is a solid rendition. I would dearly love more options – not everyone’s going to want the game to automatically fill in the 1s (I do, but I’m also not everyone), and as I mentioned, it really needs better zoom options. But for a time-eating puzzle game, it does its job splendidly.