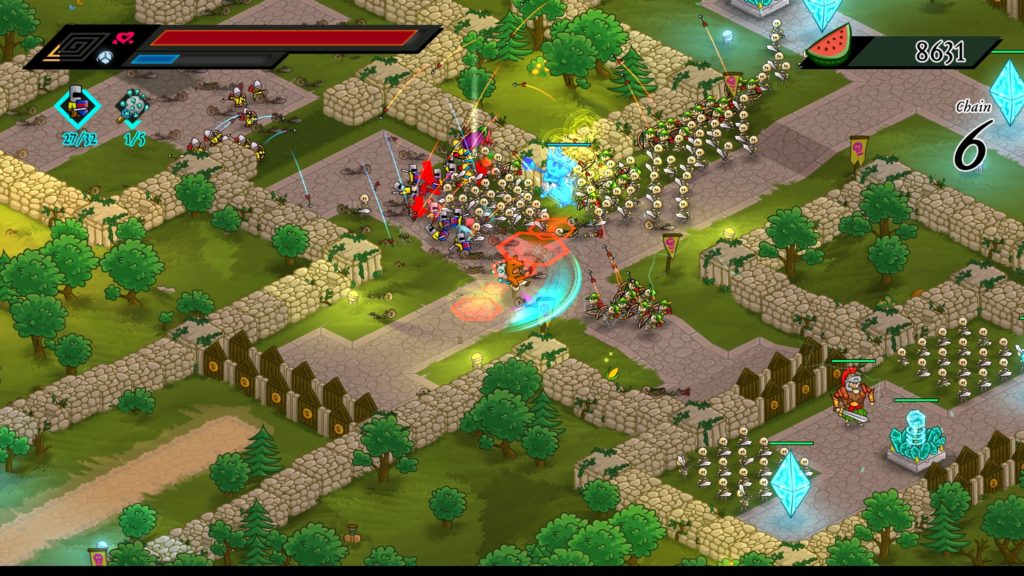 I feel very confident that Barbearian only features the player character wearing a bearskin in order to allow the pun. And I’m good with that. In Barbearian you play an adorable little guy with an axe, and must chop your way through an awful lot of enemies.

This is part action-RPG, part roguelite bullet hell, as you progress through a collection of three-level missions, hack-n-slashing your way through hundreds upon hundreds of enemies, gathering looty cash, and most importantly of all, rescuing minions to add to your mini army.

Originally an iOS game that got a bit of attention, the PC version of Barbearian has gone unfairly unnoticed by the press, because this is a really clever little thing. By subdividing an ARPG into bite-sized missions, each designed to be a challenge to get through for great victory, and mixing in the ability to improve your weapons and minions between attempts, it demands a much more interesting learning curve. This is about tactically approaching mayhem.

At first it’s just your little bear, kidnapped from his home world and taken to these peculiar floating lands to be experimented upon by strange mystical figures, and, er, a sarcastic duck. You enter each trio of levels, attempting to gather as much currency as you can, while rescuing all three minions trapped in explody glass jars. All the while you’re attacked by ever-larger onslaughts of minibeasts and you-sized champion bads. How you combat each enemy type is part of the curve, equipped as you are with your axe, a recharging dash ability, and nowt else.

After a couple of levels the game adds in ability drops, like temporary invulnerability, or faster movement, which again must be employed tactically if they’re to be of any use. You’re going to want to scoop up a randomly dropped invulnerability before you rush in to destroy the crystals that spawn more skellingtons (and yes, the game spells this correctly), especially if they’re surrounded by bombing turrets and a couple of generals.

And those rescued minions become part of the endeavour as well. They’ll show up with you at the start of each mission, but are pretty vulnerable at first. Betwixt levels you can spend to convert them to slightly stronger knights or archers, but during battle you’ll need to be constantly respawning them from your pool of energy, which in turn requires killing baddies to refill. Oh, and if you buy weapons externally, they’ll drop occasionally too, which yet again must be used judiciously if you want success.

Which all sounds a lot, because it is. But it turns out, just the right amount. This really does find a sweet spot of challenge, requiring just the right amount of button juggling to still feel in control, but always challenged. I nearly got a bit cross with the first boss fight, that opens up the second area of missions, but got it on my third attempt with the teeniest scrap of health remaining. And if I can do it, then so can you.

As your army of minions grows, you start thinking of them differently, not as a teeny group to protect but rather cannon fodder to send in ahead of you. Don’t worry! They don’t really die! You can bring them right back! They very probably don’t mind.

I love how frenetic it gets at points, and yet somehow managing to overcome it. I love getting down to a final blip of health and finding resources within me to play like a damned ninja, battling on to the end. And death means meeting with a peculiar hooded figure who’ll take a third of your money to bring you back to life. This adds in a nice little gambly edge, where you have to decide if you’re willing to risk a tricky level with rich rewards while saving up to buy a new weapon, or play it safer by going back to an earlier mission and gathering currency more slowly.

It all just comes together so nicely, the lovely cartoon design looking splendid, somehow managing to operate hundreds of enemies on screen at once without any issues, and offering a really good level of challenge without ever putting me off having another try. This is a properly fun time, and this week at an incredibly cheap price for how much depth there is in here. Now to demand a Switch port.