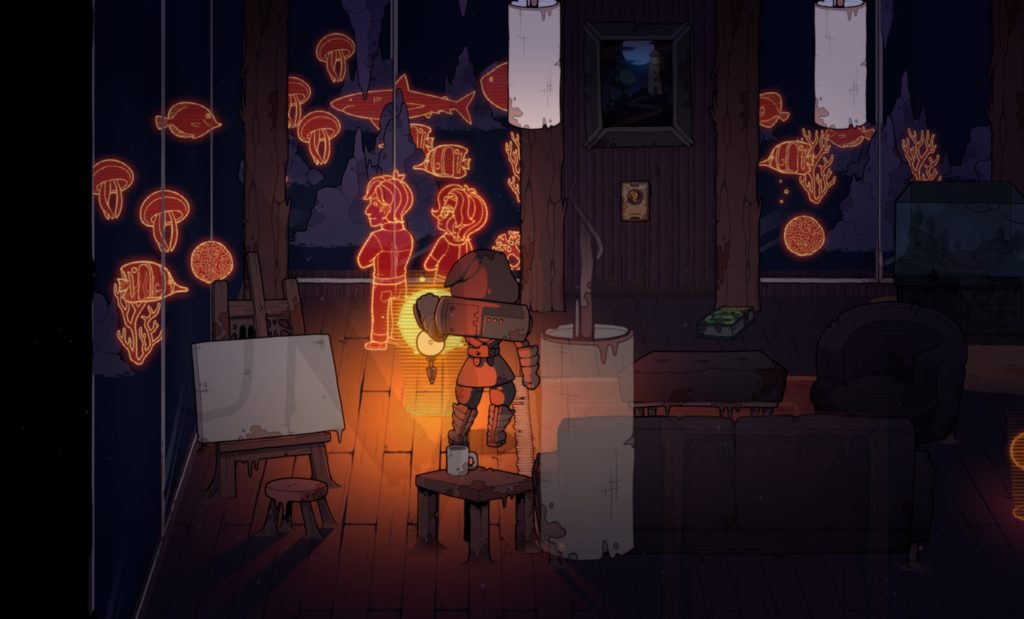 I just got told a really lovely story.

It’s funny how quick people are to dismiss a game that does this. Or, more likely to dismiss it as a game. During Some Distant Memory I didn’t solve any puzzles, jump across any gaps, shoot any mans, nor craft any food. It is, I suppose, the third-person adventure equivalent to a walking sim. And while it has faults within those parameters, it’s not at fault for being within them.

Three hundred years after a cataclysmic event has wiped out most of human life on Earth, you play Professor Jay, on an expedition from one of the last remaining colonies to discover the rumoured Sunken City. Which is a very broad setting for a very specifically located game. The majority of SDM is spent in a single house, unpicking the lives of three generations of its former inhabitants, most focused on a young man named Rik, and in turn putting together a picture of their lives pre-collapse.

This is achieved via the rather magical AI, ARORA, who via algorithms-mumble-mumble-programming is able to piece together conversational memories using found documents, environmental information and cough-cough-just-go-with-it. Your task is to look at everything that can be looked at in each room, reading through the likes of notes, poems, love letters, recorded text conversations, and a rather creepy Alexa-me-do home device that picked up all sorts of snippets of chats. Once enough is gathered, ARORA pops up a little memory node that can be played.

The Prof is also accompanied by a holographic projection of a buddy on the surface, Commander Ti, when signal permits. And the conversation between the two of them and the AI gives the game its dynamic. There’s no voice acting here, but a really neat use of conversational noises in the background as text appears – far more involving than the usual beepity-beep approach. That conversation is the core of this game, and it’s fair to say its shoulders aren’t strong enough to support the vast collection of enormous topics it attempts to take on board.

I was certainly relieved early on that it didn’t persist in its opening gambit of an ecological “cautionary tale”. Cautionary tales are, by their very nature, patronising. As a full-chested supporter of Extinction Rebellion, and clear-headed follower of the science demonstrating climate change, I need no further convincing by a game tut-tutting at me and wagging fingers as if I’m about to unleash a devastating oil spill myself if I don’t mend my ways. And were someone not to be, disappointed looks from video games aren’t going to change any minds.

Instead it moves on to a somewhat more nuanced exploration of relationships, the fragility of love, and the consequences of our parents on our own lives. Occasionally it gets this very right, occasionally it’s rather heavy-handed. There’s one particular scene, that shows glimpses of stages of Rik’s childhood, jumping about out of order with exquisite timing, that’s fantastically evocative. Which is peculiarly contrasted by entirely unbelievable moments of Jay’s confusion at basic emotions, contradicted in her next breath.

Yet it very economically tells a really neat little story in its two or so hours. What it does better than anything else is establish relationships, and lots of them, through minimal material. I’ve come away with a real sense of having learned a lot about a complicated family, and despite its occasional overly blunt ways, there’s plenty that’s implied without ever being clumsily stated.

That’s boosted by the lovely art, and a gentle, unobtrusive score. So despite criticisms of some of its writing, I thoroughly enjoyed this. And sure, yes, I’d have liked it more if it had been a fully-fledged adventure game, with some puzzles to solve, an inventory to use, etc. But it isn’t that, wasn’t trying to be that, and didn’t need to be that. At what it sets out to be, ultimately, it succeeds.