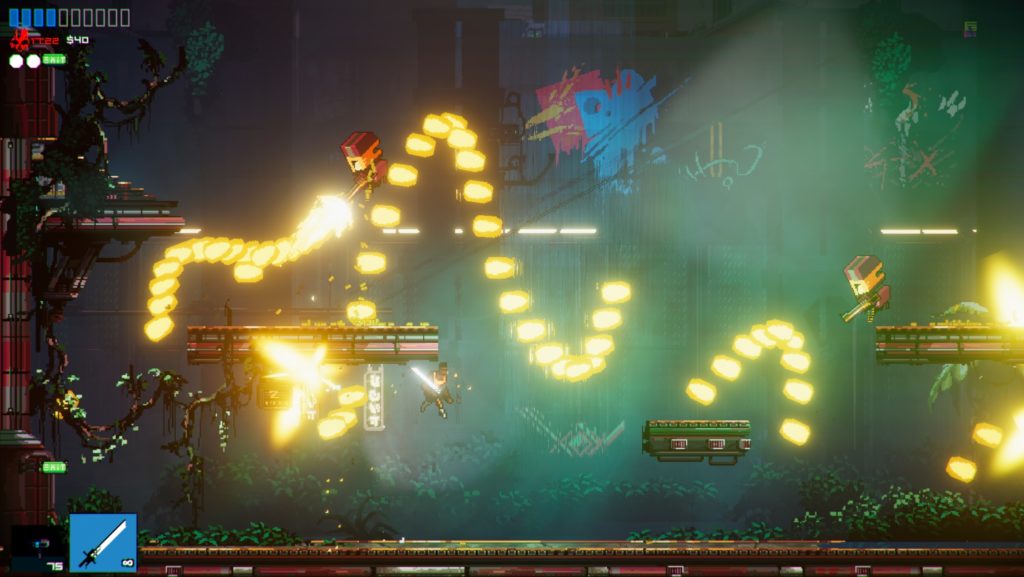 There’s a reason to like roguelite platformer Black Future ’88 immediately, despite its incredibly clumsy name: it has a narrative justification for why dropped money and items eventually start blinking then disappear. Right, right there, that’s enough to earn praise.

I was thinking about this only last week as I played the completely wonderful Luigi’s Mansion 3. Just why on Earth does money in games stop existing after a few seconds? I’m sure it must have begun as a memory-saving exercise in the Olden Days, when computers ran on twigs and string, but what a peculiar legacy notion to still experience today. Just leave it there to pick up when I’m ready! Where is it going, anyway? Well, BF88 explains it – the dystopian controllers of this sunless world, Skymelt, will scoop it up and take it away, to fund their evil ways. A reason! 10/10!

The “Black” in the title refers to darkness (“Dark Future ’88” would have been such a better name!), caused by the blacking out of the sun in 1988 after bombs were dropped worldwide. With no day nor night, rather splendidly the citizens of wherever we are stopped bothering to use clocks altogether, instead measuring all time in “minutes left to live”. Indeed, it’s all very silly-bleak neon-future stuff, an ’80s pastiche much like the other ’80s pastiches, but all done with a cheerful grin.

You, a character with about 18 minutes to live, must charge through its levels, blasting enemies with your array of weapons, double-jumping from the start, hunting down bosses, all without dying lest you be sent right back to the start to try again. Although, progress is made with permanent new unlockables made available to the characters as you play.

Each chamber you enter has its exit doors locked until you kill everything in there, after which you can choose to follow the flashing skull arrow to head toward the area’s boss, or nip elsewhere in the enormous levels to find extra bonuses, new weapons, more ammo, and so on. It’s all about gambling whether you think you’ll have enough time left to live, and whether you want to risk taking more damage before you reach the boss.

And, well, it’s glorious. It really doesn’t do anything particularly new, but it does everything so splendidly well. It’s so fast, yet I always felt in control. Your characters are immensely vulnerable, yet every mistake felt like my own. And it’s so fantastically overblown. Runs are begun by your character leaping from a speeding train that madly crashes into a wall. Explosions are ludicrously big, the screen bursting with bright colours. And absolutely best of all, when you unlock the door to a boss’s room, it explodes outward releasing an enormous flock of doves. Come on.

The bosses you’ll meet change each run, which makes the frequent restarts a lot more welcome. And while I’m absolutely terrible at it, I’m having so much fun being so. Getting better is a lot about mastering the game’s dash, especially when you upgrade it to be able to pass through walls. Such features are added by finding C.U.R.S.E. Terminals, where you can sacrifice 60 seconds of your life for a new ability. And some of these are splendidly inventive, like Guntuition, where any weapons lying on the floor in the room will fire when you attack, with the downside that Skymelt gets upgraded.

There are also secret upgrades to discover, where adding one such ability and picking up a particular weapon will trigger a “synergy”, improving one or the other or both. Combining the wall-dash (Night Piercer) with some gun or other I found unlocked the Night Piercer Set, creating a weapon that fires a super-powerful laser bolt at enemies, then transporting me into the spot where the now-dead enemy once was. Which is great!

It’s compelling, so damned slick, and there’s a couch co-op mode that can take advantage of Steam’s new Remote Play Together feature. Also the first time developer is called SUPERSCARYSNAKES, and you’d be a fool not to want to play a game made by anyone named that.