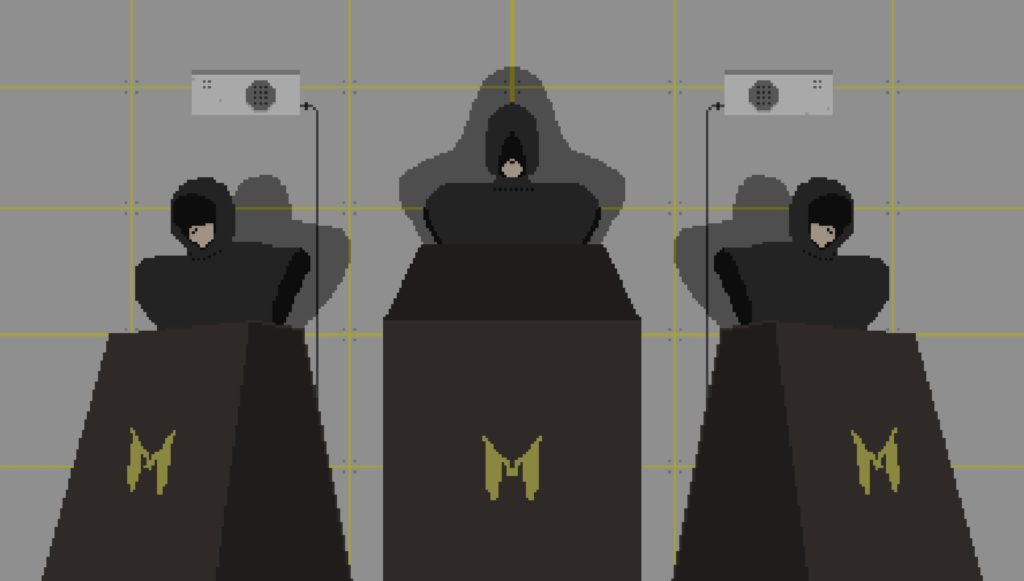 Well, it turns out you can have too much of a good thing. I was so, so excited to tell you about Booth, an often extremely brilliant Papers Please-alike in which you play a food inspector in a dystopian future. Right up until it just didn’t bloody end.

It’s 2036, and you’ve survived the Great Famine. Food in the nation of Iden is the scarcest commodity, controlled by the government, and distributed according to wealth and status. You stumble into the role of Food Inspector, a highly esteemed job, that has you living and working in the same tiny cube floating in the Skyline. Each evening you wake up, and begin the process of sorting that day’s conveyor belt-delivered produce by weight, chemical testing, and germ content, sometimes sterilising, tossing away that which doesn’t meet the standards, and absolutely definitely not stealing any of it for yourself.

From the very beginning, there are political forces tugging at you. In the transport vehicle taking you to your pod, you’re told by someone you’ll be receiving a phone call, and given a suspicious-looking bottle. Each day you order food from one of three government-approved delivery restaurants, and receive it from a delivery girl who’ll stop and chat with you for a bit, allowing you access to snippets of information from the outside world. Then there are the inspectors, and the constant threat of suddenly being hauled away for “Surveys”.

So far, so Papers Please, but in a good way. The food inspection is your daily grind, and thankfully it’s not so ridiculously fast-paced that you feel you can’t keep up. But it’s still a lot to juggle, with ever-more elements added in, new equipment delivered, and you’re graded each day on your performance. Do too badly and that’s it, you’re out, essentially a game over. But the game saves each ‘day’, and you can pick up again without any issues.

It’s the latter that steers Booth away from PP, and toward something much more Visual Novel oriented. This is much more story-driven, and while there are a truly remarkable number of ways you can approach this (from full honesty to complete disobedience), it has a path down which it wants you to head.

What’s so very impressive about this is just how much choice you have on that path. Which restaurants you order your take-out from, for example, determines the relationships you have, which have big effects on the story you experience. Let alone how you choose to respond when asked to rat out others around you, or even how you determine your own motivations for being there.

I was absolutely astounded by how answers I gave to questions during one particularly hostile conversation had repercussions hours later during another high-stakes situation. The game holds you to account for what you choose to say in really impressive ways.

The big issue is for how long it does it. Oh my goodness, this game is too long. I realise this seems like an odd criticism, but it’s about the chores you have to do. There comes a point where it switches from juggling challenge that punctuates your day, to actual incredibly tedious grunt work. Sure, that’s what it’s meant to be in-game, but it doesn’t change the reality that you’re sat there doing it. This really becomes an issue in the latter stages of the game, where your circumstances have altered, but you’re still forced to trudge through the process just to see another scene of non-interactive dialogue. I can’t explain without spoiling things, but I ended up groaning out loud, “No! Not another day!” Which isn’t an ideal reaction to a game I was previously thoroughly enjoying.

The other big issue is that it just goes stupid. Honestly, the game over options make far better narrative conclusions than the bewilderingly idiotic “twist” it tries to throw in at the eleventh hour. It makes no damned sense at all, is a weak rip-off of one of the most well-known movies ever, and needs to be chopped out and burnt.

You can see the dilemma. This begins very brilliantly, and that I’ve not mentioned the English translation is pretty dreadful is testament to how much I was enjoying it. (It’s a Chinese game, and it’s a real shame that developer Guanpeng Chen didn’t have it looked over by a native English speaker before release.) And despite my frustrations (and my complete lack of desire to fight through the final sequence to see the conclusion of the idiotic twist ‘bonus’ ending), I really want to play it again to see how differently I can approach it!

Booth outstays its own conceit, but is so often excellent along the way I still want others to experience it. Until it looses its head, it’s a smart reinterpretation of 1984, an intelligent commentary on the current state of certain rather large dictator-run nations, and an ingenious evolution of the Papers Please concept. Right up until it isn’t any more.