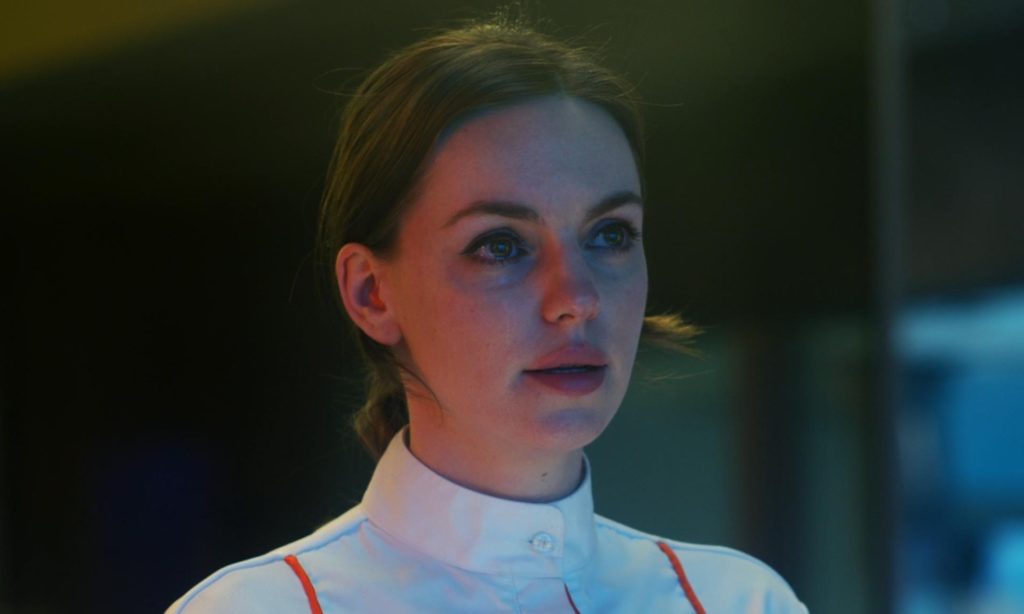 FMV games are, mercifully, nothing like as poor as they once were. In fact, in recent times we’ve had quite a few decent ones come along, not only featuring quality acting and directing, but even a solid game behind them. Possibly beginning with 2015’s Her Story, a few other titles have followed up with hi-def video, perhaps most successfully The Infectious Madness Of Doctor Dekker and She Sees Red. But leaping straight to the top of the pile is The Complex, a British effort that offers not only a solid amount of variety via the choices you make, but also a really compelling thriller of a story too.

Things begin in the fictional Asian country of Kindar. Dr Amy Tenant is a Canadian scientist treating victims of chemical attacks within the totalitarian state, alongside her somewhat unreliable colleague Rees Wakefield. After a traumatic incident, and Wakefield’s desertion, we jump to years later, Tenant now working for a biotech company called Kensington. She’s researching a new medical technology, a combination of stem cells and nanotech, that’s designed to rebuild and repair diseased areas of the human body. During a pitch meeting to their billionaire investors, Amy is called away to respond to a peculiar incident – an apparent act of bioterrorism on the London Underground, by one of the interns from their company.

What unfolds is a conspiratorial tale of betrayals, corruption and some really rather grisly situations, with your role being to make choices for Dr Amy at key moments. Running perhaps an hour and a half the first time through, you decide that initial path through the story, resulting in an experience much like a decent BBC 1 9pm thriller. Except at the end, you can start the whole thing over and this time make different decisions throughout.

Most importantly, the core story is a strong one. It’s not especially original, certainly, but it does a great job of delivering it all, with excellent acting in some really impressive locations, boosted by some reasonably good direction. Crucially, it relies very little on green screen (thank goodness, because where it does, it’s surprisingly poor), instead using proper enormous sets. And while it could quite easily have cut corners to set everything in the laboratory bunker in which the main story takes place, there’s none of that, with external shots, multiple locations, and some really nice establishing shots of London. The point is, this doesn’t feel like the usual FMV cheapo production at all – it even feels lavish at times.

The cast is great, too. No weak links in there, and the actors all have multiple previous credits. Tenant is Letterkenny’s Michelle Mylett, while Wakfield’s Al Weaver has had major roles in UK series like Grantchester and Press. Again, not the sorts of things we’re used to in filmed games! And what a difference it makes.

Talking of making differences, I was skeptical at first just how much choice there’d really be. A second play through (thankfully you can use Tab to skip any scene you’ve previously seen in that exact form, although really annoyingly you can’t jump to a specific decision to restart from there) began to feel as though lots of the options were pretty cosmetic, sometimes even resulting in the characters overruling my choice to ensure the same scene appeared. Bah. Except, I got a very different ending indeed, and that intrigued me enough to have a third play. And that time, crikey.

It felt so very different. The game records metrics about your relationships with all the other characters, and I’ve seen that gimmick before, and know it rarely changes anything. Except, um, it really did! Entire sections were unavailable or available depending upon whether a character trusted me, which really surprised me.

But more importantly, that third play deviated in various other ways too. A scene that I thought had two outcomes, where Amy attempts to crawl through an air duct, turned out to have a third very different one indeed, and that had come about because of a choice I’d made quite a way earlier. Which makes me wonder just how many other decisions influence later scenes, how many possible permutations there can be. And indeed the ending that time couldn’t have been more different.

Having completed it four times (although that fourth was a very abrupt surprise ending near the beginning of the game), I’ve seen a possible 151 of 196 scenes, which suggests there’s still an awful lot to discover. Most of those will be slight variations, but some could be whole other new surprises! And in those four plays, I found four of the nine possible endings.

This is really good! It’s inevitable that there’s some forgiving of rougher plotting I might call out if it were just a straight TV show. Honestly, low expectations because of the genre is responsible for most of that, this game so far exceeding them that my critical faculties were dizzied. Would it have made a good TV programme? You know, yeah, it’s a show I’d be happy I’d watched, especially if it had been part of an ongoing series. The fact that it looks like a full-budget BBC programme is testament to Wales Interactive, who really are pioneering this FMV resurgence.

The writing, which comes from The Handmaid’s Tale’s Lynn Renee Maxcy, mostly shines. But it does need to be called out on some really weary cliche. At one point one character actually says, “He’s as much use as a chocolate teapot,” and I’m pretty sure even considering using that line is against UN law. It’s certainly not the only one, and I wish it could have had another pass to weed out the most hackneyed.

Be warned it’s very definitely for adults, rated 18, with a lot of swearing and a fair amount of blood and disease. And with that latter, yes, with the current happenings you might want to consider how much more mysterious disease you want in your life.

Those who want more involvement than occasionally making a choice from two or three options won’t suddenly get over their frustrations with the nature of what’s essentially a visual novel, but for people who want to enjoy a good slightly sci-fi thriller, I’d really recommend this. I’ve really enjoyed it.