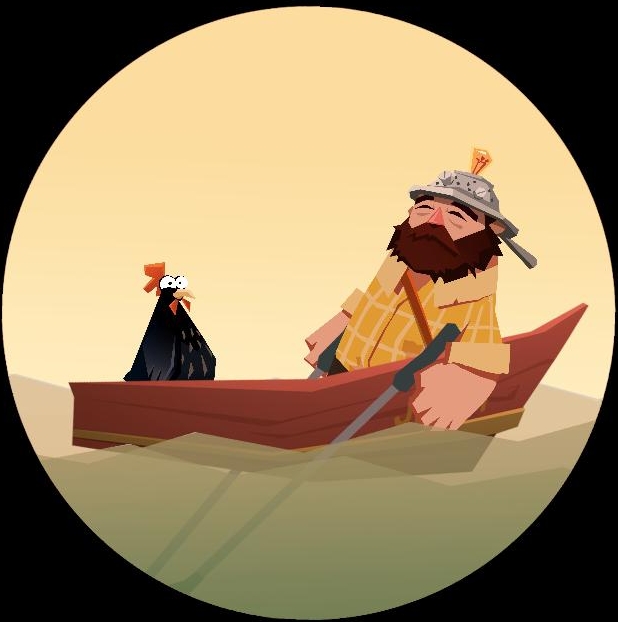 I don’t really think there are words that can describe how strange Edgar: Bokbok In Boulzac really is. Well, other than its own. So rather than try to communicate the utterly peculiar nature of this controller-controlled adventure game, I’ll quote from it. In this opening scene, Edgar is planting squash seeds in his garden. He is addressing, er, his pet chicken:

“You gently drop the seed, you water this fantastic ground, and if your heart tells you so, you can even whisper it sweet words. We’re not animals. Now my dearest, we wait. We wait for time to do its work, for the magic to happen. We watch the horizon with a stern eye, snout to the wind and then, deeply breathing into space and time, we’ll realise that we are, but only human darling. Because you see, as time flows we master our space, we fall into a rut and finally we forget. In short, we become old schmucks. Use your melon, chick, be worthy of the squash.”

I have no idea how this has come to be so glorious. I don’t know if it reads this magnificently in its original French, or if the localisation invested it with this poetic majesty, but I am pleased to report the entire game is equally incomprehensible and deranged.

I mean, there’s no doubt the game is odd to begin with. This is a story so swivel-eyed that it stares in multiple directions at once. Edgar is a loner, seemingly deeply in love with his chicken, Precious, happily growing pumpkins on his remote island. Then after a freak lightning strike of his machinery that controls the underground distribution of pesticides (keep with me), his crop is invaded by a blight of monstrous flies. So naturally he needs to head to the mainland of Boulzac to seek out the precious metal and fly deterrent, Razidium. And in doing so, accidentally uncovers a centuries-old conspiracy of… um… wine bottling? Honestly I’m really not sure.

Through conversation with a large range of the locals, and wandering the few streets of the town, Edgar pieces together the mystery of a 300 year old fire that burns beneath the streets, the suspicious behaviour of the town’s mayor, and why at night time all the townsfolks’ eyes start glowing green. Well, I say “pieces together”, but imagine someone’s knocked over all the jigsaws, and then just offers you a handful of random pieces scooped from the pile.

It’s a short-ish game, perhaps two or three hours. For the first half of that, I was pretty convinced we had a gem here, a completely bonkers gem. By the second half, as the threads began to unravel to a subatomic level, I began to suspect we had a sparkly stone someone had coloured in with a felt tip pen. It was hard to mind.

I’m reasonably certain that the translation is responsible for the loss of any sense whatsoever in the latter stages, as I was stumbling around at random to find the next move, then retrospectively interpreting the instruction that ought to have led me here. But it’s really hard to get cross when those words say things like, “So… though the hour be that of the murders of dark crows, young marvel. It is time.”

Rather importantly, it’s absolutely gorgeous looking. The art and animation are a mad pleasure, Edgar’s doolally walk is never not amusing to watch, and every location is packed with wonky-angled details that make my heart happy. It’s so cheerfully colourful and gleefully silly that you’d have to be a beast not to enjoy just looking at its nonsense gliding by.

It’s rather minimal as a point-n-click adventure. In fact, it’s best played with a controller, and while there’s an inventory, you never actually select items to use them – that’s always done automatically. But honestly, it’s so loopy that I can’t imagine this adding anything other than more confusion.

The second half is definitely less good than the first. There’s far too much wandering back and forth across the few scenes, happening upon the new conversation that might have appeared. But it’s a reasonably small place, so this doesn’t take forever, it’s not a deal-breaker. Well, absolutely everything about this gibberish should really be a deal-breaker, and yet I completely loved it.

The actual possible deal-breaker is the price. $19 is way too much for such a short game that is, when we come to the cruel cold face of a pricetag, poorly translated. At $5, I’d be heartily recommending you give it a spin, just for its sheer strangeness. At this level, it really goes and spoils everything. Bah.