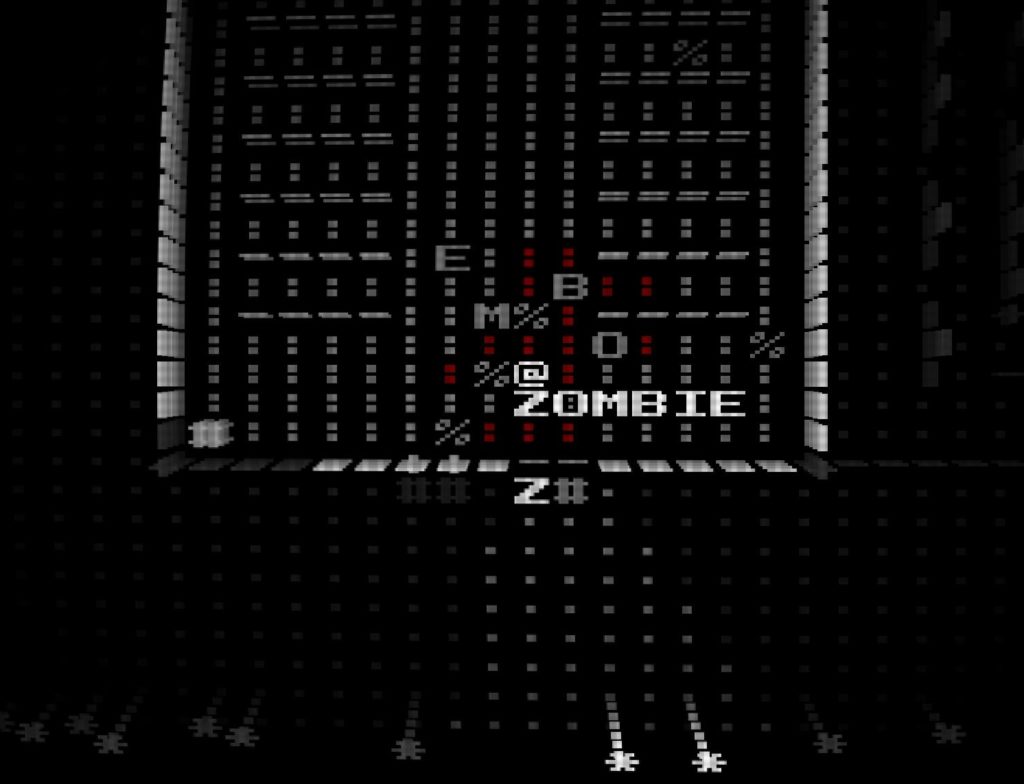 Tell me, are you scared of the letter ‘Z’? I mean, when it comes to letters, it’s definitely one of the spookier ones. Z, X, Q – I mean, none of us fully trusts them. But scared?

I have discovered the path that will take you there. It’s this absolutely spellbinding ASCII+graphics survival roguelike, Door In The Woods. Think Project Zomboid made of grammar. Think Zangband Arcade. Think pure terror at the sight of lEtTerS.

At the start, before you’ve opened up any of the other characters or scenarios, you are a detective, armed with a handgun with a single bullet, and a copy of a book. You wake in the woods, cold, hungry, thirsty and entirely not ready to be in a world that’s been taken over by zombies (Z), vampires (V), and other gruesome graphemes of imminent doom. You, an @, must immediately look for supplies, shelter, and most of all, stave off madness.

This is all presented in a really beautiful 3D ASCII format, where the top-down perspective is enhanced with a perspective shift as you scan over the landscape. Trees are asterisks on top of an upright column of full stops, while wall height is indicated by the number of underscores stacked on top of one another. By this you can spot gaps in fences, pathways between trees and bushes, and more easily pick out objects on the ground (%).

This already really smart layout then gets clever with representations of actions. Shoot a zombie with a gun and it’ll be splattered all over the floor, which is to say an O here, a B there, M and E near the wall… And of course there’s blood. Which is to say, red-coloured text. Get wounded and you’ll start to leave a trail of red punctuation on the ground.

This becomes so effective that just now, as I walked past the walls of a building and saw that almost everything inside was red, I said out loud, “Oh my goodness, so much blood.” And then felt a bit silly. And then didn’t again.

This is not to say the game doesn’t offer more straightforward feedback. Down the right side is a column listing all your various statuses, along with your inventory, and objects you can see nearby. You can click on these here to further interact (say turn wood into a campfire, or craft a weapon), or click on items in the world itself to bring up the same prompts.

And from here, in many ways it’s a familiar survival-me-do, where you must find salvageable food, potable water, warmth, and safety. There are monsters everywhere, and survival is incredibly tough. You’re going to die a lot, and the real fight is trying to do so without having lost your character’s mind.

I think it makes some mistakes along the way. I like that it’s hard, I enjoy that process of learning the systems, understanding my limits, prioritising and becoming efficient in such lean circumstances. But the goal to progress in Door In The Woods is experience, used to unlock other characters and scenarios, and the game seems to go to extraordinary lengths to deny you this. Sanity is by far the hardest commodity to maintain, affected not just by battling but simply encountering monsters, and even eating mouldy food. Go insane and the game undeniably becomes very interesting, as your character develops paranoia, and you can no longer trust what you’re seeing. But die without your mental faculties and you don’t get to keep any of the scant experience you’ve gained. I’m not entirely sure what this gains, since the concept of maintaining experience after death is already preposterous, and not really requiring of conditions.

Equally I don’t really understand the awarding of experience. You get points for gathering pieces of notes together and reading them, but not for successfully killing a zombie. Which is plainly odd.

My other complaint is sound. It has some absolutely terrifying music, really perfect background noise to building up the horror. And it mostly doesn’t play it. For the majority of the time you’re playing in atmosphere-breaking silence, which seems like a really odd choice. (And of course when it does come in, it then interrupts whatever music you’ve put on to maintain your own ambiance.)

I’ve had some good runs though. Barely made a scrap of experience, but found good stores of water, even some edible food, and staved off insanity until my death by some Lovecraftian surprise appearance in the woods.

Most of all I’ve been thrilled by those moments of seeing a ghostly white square appear for a moment on the other side of a wall, wondering if you’re going to be able to escape before it hears you, then making a colossal crashing sound as you search furniture and bringing it racing toward you.

As with so, so many survival games, I find the emphasis on micro-managing bodily fluids over exploration and crafting to be disappointing. I’m not sure who it is out there saying, “Screw stumbling upon a cool new situation, I want to worry about drinking water more!” but they clearly must be out there. But this unequivocally delivers on the chills, and that’s no mean feat considering the format.

Which is all to say, I think (one-man) creator teedoubleuGAMES’ own description, while completely excellent, is a little unfair. They say of Door In The Woods,

“This game is a venture into an alternative timeline in which graphics and sensible game design were never invented.”

It’s not fair on either count, in fact. Because they’re cheekily not acknowledging this isn’t a simple ASCII roguelike-like, this is something far more graphically sophisticated, and rather beautifully so. And while I take issue with elements of the game’s design, a great deal of it is very sensible indeed. This is tough as nails, but really rather good.