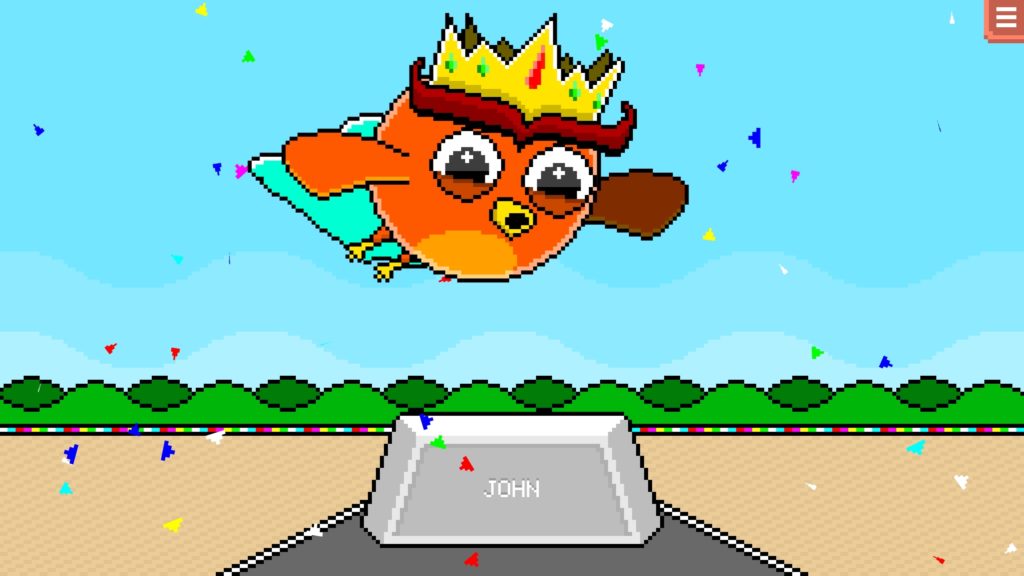 Thank goodness. Thank GOODNESS. Because there’s a chance that moments ago you weren’t aware of Icarus Proudbottom, and his stunning array of games. But now, and forever more, that’s put right. And I’m just delighted to say that Icarus Proudbottom’s Typing Party is a genuinely fantastic game.

I first discovered the bizarro world of Icarus (and his faithful spirit owl Jerry) with Icarus Proudbottom In: The Curse Of The Chocolate Fountain, a game about a man flying through the air propelled by an unending stream of poo coming from his bottom. Dodging ducks. This is a game that contained the line, “Holy wow! I can’t stop making boom booms out of my bottom!” Mr Proudbottom has come a long way from his somewhat ignominious beginnings – he’s now more famous for teaching typing than anything else.

That’s mostly thanks to the completely brilliant Icarus Proudbottom Teaches Typing, a typing game that quickly descends into complete madness. Since then he’s had a sadly failed attempt to become a Space Captain, but now he’s back, once again doing what he does best: offering us silly ways to type. And this time it’s multiplayer!

Typing games have a surprising history of being very silly, from Typing Of The Dead to David Lynch Teaches Typing. Add to this list Icarus Proudbottom, and his delightful collection of multiplayer battle-based typing mini-games.

The game begins by encouraging you to plug two or more keyboards into your PC. I didn’t even know you could plug more than one keyboard into a PC. From then on you can choose your number of players, and then let Jerry the owl spin a while to select from one of nine different typing games, each really splendidly realised and a lot of fun to play. Perhaps you’ll get Word Wizard – a game of rock, paper, scissors played by flinging said items between two castles by typing nonsense words associated to each. Or Type Type Regime Change, naturally a competitive rhythm action game where you must type the letters as they cross a line.

Maybe it’ll be Blimp Buddies, with each player controlling either side of an armed blimp as it’s attacked from the left and right. Here you have to type letters to move up and down the blimp, then words to fire nearby cannons, while remembering to refuel throughout the attack. Whoever lets the blimp get destroyed loses that round. There’s a sort of air-hockey-meets-Pong game of typing words at the right moment to aim a projectile at a table of pucks to try to push them over the opponents line. There’s just so much silliness here.

For those lacking a local chum, it also has a vs AI mode, and it’s pretty decent! You take on Mark22, who can be set to pleasant or insulting, with varying difficulty levels, who’ll put up a good challenge. In fact, in my first game set to first-to-three, he was winning 2 games to 0, from which I staged a remarkable comeback tow win 2-3. But of course this is primarily intended to be a local multiplayer, during which competitiveness will likely result in keyboards being smashed over one another’s heads.

It’s all absolutely hideous/brilliant to look at, a garish mess of late-80s era DOS graphics, made even clumsier by its having originally been built in Flash (RIP), repackaged to just about work in AIR. It’s best run in fullscreen or things start going wrong (and it’s pretty tiny otherwise), and yet this only adds to the game’s daft charm.

I mean, it’s great. It’s very funny, it’s extremely silly, and it’s a really entertaining typing game that will inadvertently improve your tippity-tappity skills whether you mean it to or not. And for just $4 on Itch, you’d be an ugly fool to complain.