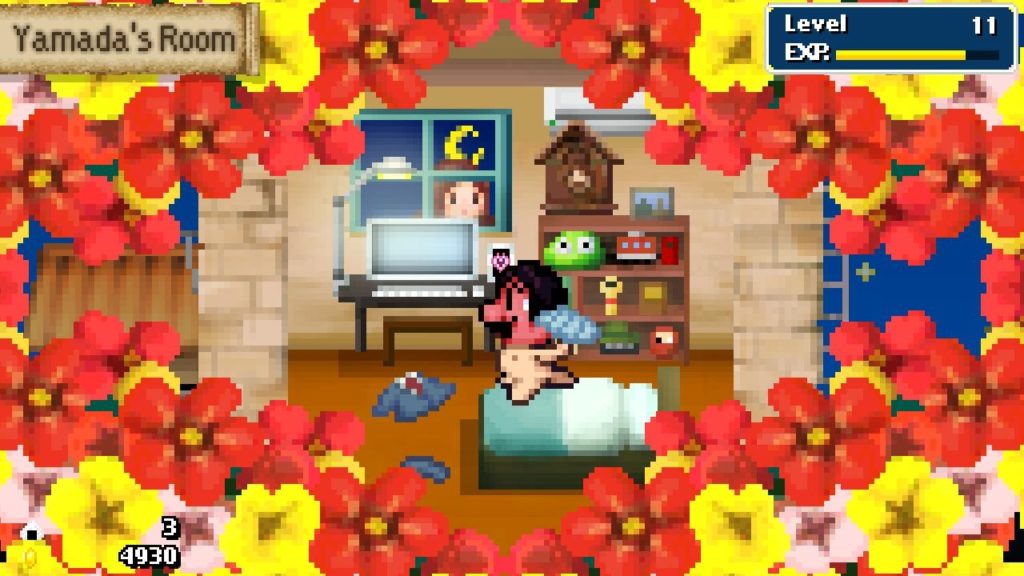 “Yamada-kun (Age 36) is a programmer at a major game publisher. He hates his job. Alone in his apartment, deep into the night, he toils to create a game of his own: it’s an RPG, and he is the hero, Brave Yamada! One day, he falls in love at first sight with his new neighbor Maria-chan.”

Good grief I’m so glad I did. (It’s worth adding that I’ve since realised that this came out for Switch in June, and got a smattering of reviews that mostly recognised how splendid it is. But it’s been ignored on its PC release.) Dandy Dungeon is quite unlike anything else, a sort of Möbius strip of meta-game, in which you really are playing a 30-something programmer who spends most of his days skiving work, sat in his underpants, writing code. As he does so, he adds new features to the RPG he’s trying to make, and you end up play-testing it for him.

And when I say “you”, I mean it, sort of. He talks to us, the person on the other side of the screen, although it then becomes a little confusing as you appear to also be a colleague from work who comes to check on him and ends up playtesting too. Let’s just say coherence isn’t the narrative’s number one focus.

This is something rather more strongly exemplified by Yamada’s latter motivation for this development: his love-at-first-sight reaction to his new neighbour, Maria. She is also, a touch unnervingly, identified by Yamada as a lot younger than him, adding the cutesy Japanese affix “-chan” to her name. But since she’s living alone in an apartment, I think we can safely assume she’s an adult and not get creeped out. Yamada becomes absolutely convinced by the wholly bizarre premise that if he writes her into his game (Princess Maria) and rescues her repeatedly along with in-game kisses, she will, he asserts with absolute conviction, fall in love with him in real life.

And if that all sounds weird and awkward, it’s certainly meant to be. Yamada, who looks like if Mario had got a city job, isn’t exactly portrayed as a man who’s making all the best life choices. And yet, and here’s the rub, the game he’s programming is a really good idea!

Really, the in-apartment section of the game is mostly just about clicking ‘next’ as conversations play out, and imaginary levels climb up. The bit where you join in is the playtesting, and it’s immediately clearly a really strong idea for a good mobile RPG.

You’ve got maze-like dungeons on a grid, monsters, treasure and bonus items laid out on the tiles, and then a short time-limit to map out the route you’ll take. An arrow is drawn looping around the level, with the ideal route crossing every tile once. Miss tiles out and you’ll get a lower score and less treasure for the level. Then it all plays out when you press go. Fights against monsters are run as hidden dice-roll combat, and not dying on the way can be dependent upon having picked a smart order in which to negotiate the dungeon, making sure you cross over health pick-ups after a couple of monsters, and before reaching the final boss. Then as you’re going you can interject with any items you might have in your inventory, each with their own countdown timer based on moves made. See! That’s a good idea! I’d play that game!

Which is how the weirdness begins, because you ARE playing that game. Except just as you’re getting into it, it ends, because – well – Yamada is still making it! You zoom back out into his apartment for more of his rather awkward life. Next time you play, it’ll be slightly different, longer, more involved.

This then gets another fold stranger when Yamada adds a pause menu and options to his game, and for the first time you can then pause it and access the options to the entire thing. I mean, that’s so dumb, and I love it so much.

The conflation grows ever weirder when death is added into the RPG, and yet the ability to revive yourself relies on eating rice balls that Yamada has in his real life. (And there’s a really lovely little riff as he explains to us, the player, the significance of rice balls in Japan as soul food.) Further confusing is you select new equipment and items externally from the game, as well as upgrading weapons and armour with materials gathered during play. But when you do that upgrade, say combining your sword with some iron ore, it’s carried out by Yamada rapidly coding the change into his game. Meaning I’ve absolutely no bloody clue in which layer of reality any of it is occurring, and completely love that this is the case.

As things progress you open up more levels to try, more reasons to retry them, until Yamada has quite the game on his hands. As life throws obstacles at him, he writes those obstacles into the RPG, and life imitates art imitating life imitating art.

There’s a lot going on here, and it’s extremely smart about it. And it just grows bigger the more you play. New dungeon types appear, shorter runs, runs for specific upgrade items, a pyramid for super-tough 30-stage runs you can bail out of every few levels, and then you’re crafting weapons through upgrades, then upgrades of upgrades, seeking out super-items, trying different outfits to find new bonuses, and all the while the door is constantly knocking with characters popping over to deliver daft skits or new content. Phew.

It’s absolutely compelling. While you can tell its origins are in an iOS game from a couple of years back, it feels comfortably at home on a PC or on Switch, massively more involved than you’ll first expect, and so satisfying to keep plugging away at. At the point where the difficulty creeps up, what essentially boils down to “grinding” to get the upgrades you need feels far more like having another turn on that puzzle-cum-RPG game you’re enjoying so much. That it rewards such play, rather than makes it feel like a chore, is perhaps its most brilliant turn.

This is hilarious, bemusing, utterly daft, and perhaps most importantly, an incredibly good puzzle-RPG game in the middle of it all. The key is, the game inside the game could have been released as its own thing, and been well worth buying. So it is that the silly, peculiar story that goes on around it is just icing.

The £15 tag may seem high for the sort of game it looks like at first glance, but – well, first more indies should be charging that much anyway, and second, this goes very deep, and lasts a very long time. It’s a joy.